The amazing story of a legendary battleship

On Thursday night, September 21st, the architect-restorer of the Greek Ministry of Culture, Mr. Michaelis Lefantzis, who is more widely know for the great archeological discovery at Amphipolis in Macedonia, presented in the Main Naval Station of the Hellenic Navy, on the island of Salamis, another important find which relates to what we call industrial and/or technological archeology.

The Greek scientist discovered as part of building materials in a 19th-century building in the Main Greek Naval Shipyard, parts of the ship “Karteria” (Erceverance), the first in the world’s history steamer that took part in naval war operations. “Karteria” was built in Great Britain and fought in the Greek Revolution of 1821 against the Ottoman Empire in the years 1826-1828. 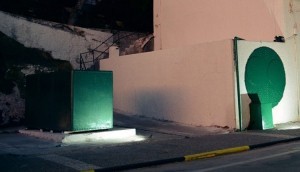 Under strict security measures, undertaken by men of the Special Forces of the Hellenic Navy, members of the public, accompanied by the leadership of the Hellenic Fleet, the Navy Administration, officials of the Ministry of National Defence and of the Ministry for Foreign Affairs, University professors, historians and selected journalists were presented on the oldest pier, right in front of the building, the parts of the ship which were built in and a short distance from the point where it is believed that a skeleton of a sunken ship, was used 126 years ago as a the foundation piers of the Naval Base.

The announcement of the these findings is of major importance not only because “Karteria” (Erceverance) is the oldest naval steamer but also because the surviving “Karteria” (Cochran – Galloway) boiler house, can be found to be used even today in other uses, as the oldest saved boiler on an international level. 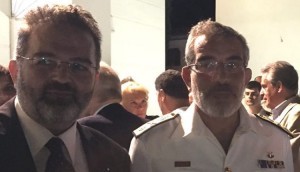 Michaelis Lefantzis said in his presentation, “the modern search for parts of the ‘Karteria’ parts and machine began unexpectedly in April 2017 when I was asked by the Administration of the Salamis Naftachimos to update a Technical Report that I prepared during my tenure in the Armed Forces as a national service conscript at the Naval Station in 1998, for the architectural restoration of the building of the Port Movement, built in the second half of the 19th century.” 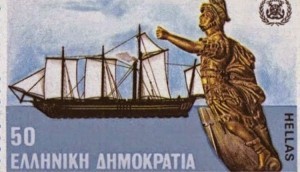 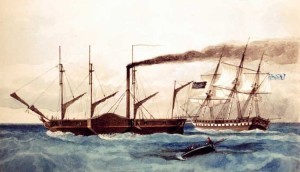 (The “Karteria” (Erceverance) as shown, in two attempts to depict it)

A new autopsy was then carried out in the building, where new elements of history and building phases emerged. Nineteen years after the initial study, which was absolutely preliminary and rudimentary, and while I did not visit the ground floor of the building, the new visit was to be a total and utter surprise: the existence of iron poles and beams with heavy iron –cast nails (ie “nailers”) and a boiler, dated back to the first quarter of the 19th century, and which originally believed to belong to a ship of the time and secondly joined the building in order to reinforce the roof. As finally proved by our research, all these materials we are referring to begun their life as a building material of a factory building in Manchester in 1817, being adapted to our naval history in 1824 – 1826 and finally returning as building material for the building of the Salamina Port , in 1891.”

This discovery is of worldwide interest and connects two great naval nations, Greece and Great Britain. It is a fascinating story, drawn from the novels of Jules Vern, taken out of an early 19th century novel where seaman craftship creates a truly experimental warship – a complete pioneering naval vessel of its time – using the building materials of an English factory. These materials will find themselves in the flames of the Greek Revolution, will sail in naval battles against the Ottoman Fleet and after many decades these materials ship that hosted these endeavors will sink to the bottom so as to become a naval dock. These were used again in order to build a building for the Hellenic Navy in the main naval station.