It should be there

Astronomers have discovered a thin disk of material spiraling into a supermassive black hole in a very faint galaxy — an unexpected finding that may provide further clues to the dynamic processes surrounding black holes.

Using the Hubble Space Telescope, astronomers observed the black hole at the center of the spiral galaxy NGC 3147, which is located around 130 million light-years away in the Draco constellation. Black holes in low-luminosity galaxies like NGC 3147 usually lack sufficient material captured by the galaxy’s gravity to feed off of, and are therefore considered “starving,” Hubble scientists said in a statement. 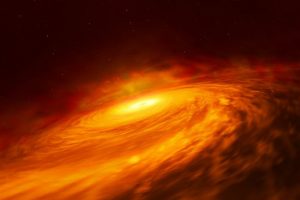 The researchers were surprised to find a thin disk encircling the black hole at the center of this galaxy, because the disk looks similar to the kinds of accretion disks that typically encircle black holes found in extremely active (and much brighter) galaxies.