Fortunately, Greece is a western democracy that still values and protects free speech, as well as the unhindered free association between individuals and their right to disseminate ideas and political views.

However, the incident of 10 female high-school students from Nea Chalkidona in western Attica who made a mockery of the school parade during celebrations on the anniversary of the Greek national OXI Day by emulating the Monty Python’s legendary Ministry of Silly walks sketch, caused outrage in the Greek public.

Although the teens issued a “manifesto” of sorts published by leftist newspaper “Efimerida Ton Syntakton” explaining why the pulled off the stunt, many dubbed their act as an outright hubris to the memory of those who had fallen in the Second World War fighting against the far-right ideology -ironically, the same ideology the students purport to be opposing in their rather hap-slap puzzle of ideas presented in their manifesto.

In one excerpt of their “manifesto”, they write: “What can militarism have in common with freedom? What can the defence of the freedom of a people have in relation to patriotism we are taught in school since childhood? At schools, in parades, everywhere”.

Such actions of rebelling against the status quo and the institutions are natural, even necessary for youth as they act as release valves, as methods to make their presence relevant and purposeful, making them belong to something larger than themselves. It is imperative in the formative years of teens before moving on to real-life -spoiler alert young ladies, you will grow up and have to at some point in your lives take personal responsibility and start appreciating things you cannot imagine could be possible now- to defy and challenge the norms in a society.

They seem to misunderstand the difference between honouring the dead that shed their blood for their freedom to mock them today with the parades themselves and “militarism”. No-one is celebrating militarism or parades but the courageous dead…

If it had been a stunt just to have some fun, its impact would have most likely been less offensive.
But their intentional choice to justify the action after it happened via a leftist political “manifesto” places it in a different category and raises some questions about the education system as a whole and their school that approved it.
There is a fine line between freedom of expression and the right to offend, a debate which will definitely continue to rage on in the future. One thing is for sure, though.

Freedom of expression and dissent is secured by law in western democracies, an alien concept in countries adopting the ideology these young girls, and possibly their school, seem to be shrouding their manifesto in… 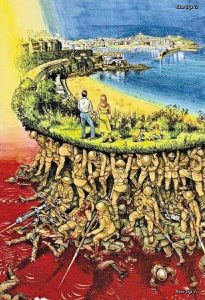