A recently discovered engraving is baffling local people in the small village in north-west France. The locals have made various attempts to decipher the inscription and have enlisted the help of many local experts to no avail. Now they are offering a prize to anyone who can decipher the mysterious inscription. 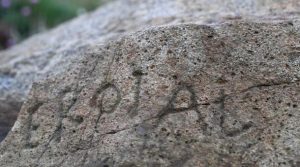 The inscription is near the small village of  Plougastel-Daoulas, Brittany, on the north-west of France near the Atlantic coast . The engraving is on a rock that is as ‘high as a man’ and is only seen when the tide is low. According to Newsweek, ‘the rock is accessible via a path from the hamlet of Illien ar Gwenn just to the north of Corbeau point’.  Its remoteness and the fact that it is completely submerged at high tide mean that it only came to light four years ago. The Mayor of Plougastel-Daoulas Dominique Cap, has stated that no one has been able to understand the meaning of the engraving, despite their best efforts. 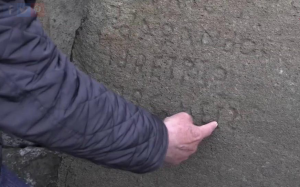