The first application was designed for Chinese passengers in their mother tongue, making it one of the first “China-ready” airports in Europe

The firm Mobile Technology has developed a new application for Pepper robots, this time to inform the public about the coronavirus protection measures that must be observed at Athens’ ‘Eleftherios Venizelos’ international airport and during flights.

According to a statement, with the message “Your health is our priority”, the country’s largest airport recruited the popular Pepper robots, which were already at its disposal, to provide information to travellers (in Greek and English) in their own special way following the gradual resumption of airline travel after June 15.

According to the same announcement, the first application was designed for Chinese passengers in their mother tongue, making “Eleftherios Venizelos” one of the first “China-ready” airports in Europe. 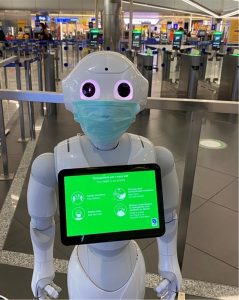 The second application was designed to serve Greek-speaking and English-speaking passengers who want to be informed about the weather, flights, etc. In addition, Pepper robots can entertain the public with a multiple-choice quiz about the Parthenon, as well as educational content games, while also conducting a short public satisfaction survey.

Mobile Technology – as a certified partner of the manufacturer SoftBank Robotics – has undertaken the design of all three active applications with which the robots have been operating since 2018, according to the airport’s specifications.