The Defence and Foreign Ministers will travel to Paris tomorrow

Greek Prime Minister Kyriakos Mitsotakis will visit Paris later today, as a stopover from New York where he attended the UN General Assembly, and meet with French President Emanuel Macron, at the Palais des Champs-Elysées.

The official reason for the Greek PM’s presence in Paris is the opening of the exhibition “Paris-Athens: Birth of Modern Greece” at the Louvre Museum, which is organised for the 200 years since the Greek Revolution of 1821.

However, as tensions between Greece and Turkey escalate off the coast of Crete, some pundits believe the visit is more than a formality, suggesting it could be related to a further strengthening of diplomatic and defence ties between Greece and France.

The ‘menu’ of the official dinner held by the French Presidency will include, apart from the exquisite delicacies…the French frigates, the acquisition of which has been on the table for over a year, as the Greek armed forces are in the process of a new arms program.

The Greek Prime Minister will be welcomed at the Louvre by the French President and after the opening of the exhibition, they will have a working dinner at the Palais des Elysées.

According to sources, Greece and France are coming even closer, with some speculating the two sides could even shake hands for the supply from the Greek side of the French state-of-the-art Belh @ rra frigates, under a contract worth more than four billion euros. While the original plan provided for the acquisition of four frigates, the latest information indicates the Greek government is leaning towards reaching a decision to order three French frigates.

The discussions seem to be at such an advanced level that the report wants the Ministers of Foreign Affairs and National Defence, Nikos Dendias and Nikos Panagiotopoulos, respectively, also traveling to Paris tomorrow to discuss the details of the deal likely to have agreed upon tween Macron and Mitsotakis.

It is recalled that a first idea for what has “run” lately on the issue of frigates was given by Mr. Panagiotopoulos from the floor of Parliament last week when, answering a relevant question, he reiterated that the final decision on the important supply will be taken with The only criterion is the interest of the Navy and the Armed Forces.

“The decision on the frigates has been delayed for decades. It is a difficult decision and it is not a big deal to take a few more days to make the right choice based only on the interest and needs of our Navy. You will wait a little longer,” the Defence Minister had said recently in Greek Parliament. 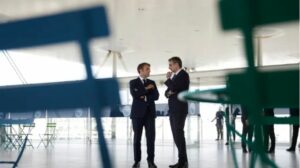 It is worth noting that today’s meeting between Macron and Mitsotaki will be the third in a short time (the second in just 10 days) and follows the frequent contacts that the two leaders have had lately.

Could AUKUS be the “accelerator” of the agreement?

The flurry of activity observed over the issue of the procurement of frigates lately is rooted in a series of complex factors, one of which is the rift between Australia and France over the cancellation of an order of nuclear-powered submarines following the formation of the AUKUS military alliance.

On the one hand, it is a common assumption that the American frigates HF2, MMSC (Multi-Mission Surface Combatant) have been received with great praise by the officers of the Greek Navy either for the technology they have or for the demand they have in the international market.

On the other hand, the conclusion of the agreement between the USA, Australia, and Great Britain, ie the so-called AUKUS or otherwise the small NATO of the Pacific, has definitely shaken up the traditional geopolitical and military alliances, shifting the global defence balances. 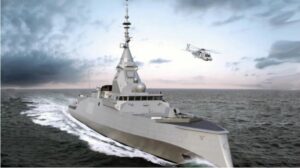 Many analysts agree that the Anglo-alliance is aimed at China, but its formation has also contributed to the weakening of Europe as an international power both diplomatically and defensively, since one of the strongest defence industries in the world, France, saw a $ 90 billion contract trashed in the blink of an eye.

This new reality on the global diplomatic and geopolitical board places the meeting between Mitsotakis and Macron in a very different light, while both men have talked about the need for a European defence union. The day before yesterday, the Prime Minister said from the podium of the UN General Assembly that a European Defence Union would strengthen NATO, force European countries to address issues of interoperability and meager defense budgets, and accelerate their cooperation on cyber-space issues.

In light of all this, Paris is now throwing all its weight behind the program of the Greek frigates. In addition to the huge nominal value of the frigate program, it is a common secret that whoever undertakes the shipbuilding will have a privileged partnership with the Navy for the supply of spare parts and other materials for the next 40 years.

At the same time, rumours circulating at the Greek Pentagon say that the Americans, who did not supply our country with state-of-the-art frigates, similar to the ones provided to Australia with nuclear-powered submarines, will retreat discreetly to appease the French anger…