A relevant protocol was signed in Hydra

The Municipality of Hydra and the Municipality of Tarpon Springs in the State of Florida of the United States of America signed a protocol of a sister city agreement in Hydra on Saturday.
The signing of the relevant protocol will follow in the American city, while the two Municipalities will soon announce their first joint actions. The fact that sponge divers from the island of Hydra were the first to arrive in Tarpon Springs and formed the beginning of the city’s own sponge identity was the reason for the signing of the aforementioned protocol.

In his Statements, the Mayor of Hydra, George Koukoudakis, pointed out, among other things:

“Our desire and pursuit from today should be to bring our citizens closer. To create relationships of cooperation, mutual respect, and mutual assistance. But above all, what we need to do is to bequeath the elements of the past that connect us to the new generation.”

The Mayor of Hydra proposed the first initiative should be the organisation of a mission of students from Tarpon Springs to Hydra to attend the traditional sponge custom of the Island and see the Epitaph thrown into the Sea during Easter. 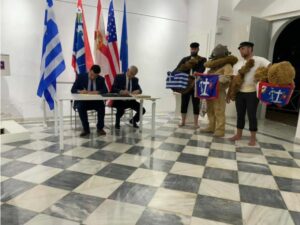 The Mayor of Tarpon Springs,  Christoforos Alahouzos, after thanking his counterpart for the hospitality, made an extensive reference to the beginning of the sponge business in his city, noting the decisive contribution of the Greek sponge divers, at the beginning of the last century. Today, Tarpon Springs, thanks to its sponge fishing identity, is a popular tourist destination.

The ceremony ended with the presentation of traditional dances by children of Hydra.