No justice for them?

A shocking new report has revealed over 5,000 new cases of Female Genital Mutilation were recorded between 2016-2017 in the United Kingdom.

Reported by anti-extremist group Quilliam, the damning dossier states that though “5391 new cases of FGM were recorded in the UK […] Britain has failed to bring a single perpetrator of FGM to justice.”

The report aims to “highlight the dire situation of FGM conviction rates in the UK” to “act as a catalyst for proactive action on implementing FGM laws in Britain.” 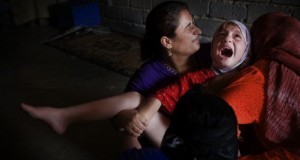 Muna Adil, the author of the report, states:

“The fact that we’ve been collecting detailed FGM data for some years now and still haven’t seen a single case brought to justice is a shame and utter disservice to the thousands of young girls and women who have undergone this horrific practice. Dis-empowered survivors lack the resources, knowledge, and voice to bring charges on their perpetrators, which makes it our duty as civil society to push for a harder, more active stance on this issue, rather than the passive law currently in place. We already have the data to indicate which communities and boroughs are high-risk situations – there is no credible reason for us to be shying away from this issue.”

The report, with a foreword by FGM survivor Ayaan Hirsi Ali, is available for free download here