Only 27 PMs showed in Plenum

The image of only 27 of the 300 Greek PMs attending the plenum in parliament on Wednesday, January 31, and observing a moment of silence in honour of the fallen Greek servicemen presented a poor sight. Twenty-two years passed to the day since three Greek servicemen, Christodoulos Karathanassis, Panagiotis Vlachakos and Ektoras Gialopsos were killed on the night of the Imia crisis with Turkey in the Aegean Sea on January 31, 1996. At a crucial moment when the negotiations with FYROM on the issue of the name dispute are open, the image of a virtually empty chamber was not a very optimistic one. 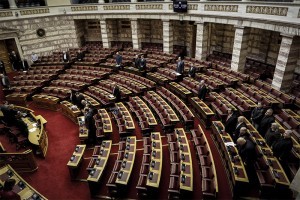