The ocean beneath the icy shell of Saturn’s moon Enceladus rises nearly to the surface in some places, a new study suggests.

Measurements by NASA’s Cassini spacecraft indicate that as little as 1.2 miles (2 kilometers) of ice may cover the ocean in the moon’s south polar region, according to the study.

“This discovery opens new perspectives to investigate the emergence of habitable conditions on the icy moons of the gas giant planets,” Nicolas Altobelli, the European Space Agency’s (ESA) project scientist for the Cassini-Huygens mission, said in a statement.

“If Enceladus’ underground sea is really as close to the surface as this study indicates, then a future mission to this moon carrying an ice-penetrating radar sounding instrument might be able to detect it,” added Altobelli, who was not involved in the new study.

In 2005, Cassini discovered jets of water ice, organic molecules and other material blasting into space from four large “tiger stripe” fissures near Enceladus’ south pole. Scientists think this stuff is coming from the underground ocean, which is believed to be in contact with Enceladus’ rocky mantle.

Such discoveries have led most astrobiologists to regard Enceladus as one of the solar system’s best bets to host alien life, along with the Jupiter moon Europa (which also harbors an ocean beneath its ice shell).

For the new study, the researchers analyzed observations that Cassini made of a 310-mile-long (500 km) swathe of ground just north of the tiger stripes. The probe made these observations using its radar instrument during a November 2011 flyby of Enceladus. (The mechanics of the flyby prevented measurement of the tiger-stripe area itself, ESA officials said.)

This “thermal anomaly” in turn suggests that Enceladus’ ice shell is quite thin at and around the south pole, perhaps just 1.2 miles (2 km) thick in places, the researchers said. 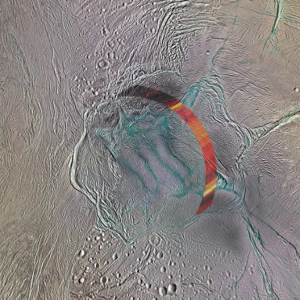 (Shown in red is the 310-mile-long (500 kilometers) strip of land near the Saturn moon Enceladus’ south pole. NASA’s Cassini probe studied this feature with the probe’s radar instrument during a November 2011 flyby. The snaking, bluish-green lines are Enceladus’ “tiger stripe” fractures.)

The new results are broadly consistent with the findings of a 2016 study by a different research team, which was based on Cassini measurements of Enceladus’ gravity and shape, as well as the way the moon wobbles. The 2016 study determined that the ocean is 11 miles to 14 miles (18 to 22 km) thick on average but thins to less than 3 miles (5 km) near Enceladus’ south pole.

The new study was published Monday (March 13) in the journal Nature Astronomy.