There were no injuries

A shocking video of a car veering off course and crashing into the side traffic barriers was recorded by a motorist in Attica. The accident, which fortunately did not result in any serious injuries, happened in the area of the Olympic Village.

In many instances, motorists crossing the main Avenue leading to the Olympic Village in the evening hours are met with illegal car races which often result in accidents. 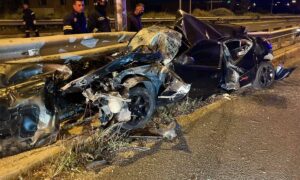 One such incident took place on the night of Tuesday 21/4 when the driver of a black Honda Civic, moving too fast, lost control of the vehicle, hit a road parapet, spun out of control, before eventually ‘landing’ on the dividing sidebars. 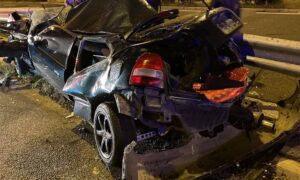 According to information and despite the severity of the impact, the driver of the Civic came out of the interior with minor injuries. Luckily, the passengers of the following vehicle narrowly escaped contact and recorded the accident.