Mediterranean cyclone Ianos is battering the west coast of Greece, with the Ionian island feeling the brunt of its force.

A shocking video from Sami, Kefalonia, illustrates the force with which cyclone Ianos is sweeping across western Greece, as it shows boats ashore from the immense power of the winds.

Roads have flooded huge waves spilling onto ports and bays, filled with water, boats have sunk, houses flooded, businesses destroyed, while 34 people have been evacuated to safe places. Winds are estimated to have reached up to 11 Beaufort. 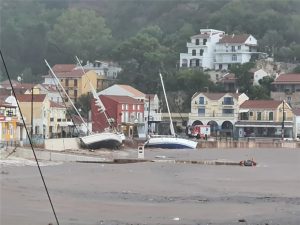 The cyclone is expected to affect mainland Greece in the next days and Greek authorities have issued instructions to citizens to stay safe and avoid going to seaside areas. 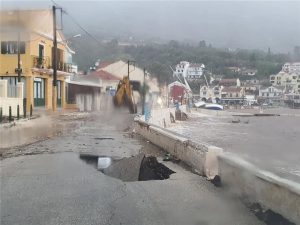 The island of Ithaca has been hit the hardest as it is experiencing as total blackout resulting in a total loss of communication. The Fire Brigade along with PPC crews have been trying to restore electricity under extremely difficult conditions.