A total of 26 people were killed after a gunman walked into a church in a tiny rural community about 30 miles east of San Antonio, Texas, USA and opened fire on Sunday, an official said.

The official, Paul W. Pfeil, a Wilson County, Tex., commissioner, said he did not have a total count of the number of dead in the shooting, which occurred at the First Baptist Church of Sutherland Springs, but he said it was “more than 20.”

Albert Gamez Jr., another Wilson County commissioner, told CNN that he was told by the police that the gunman was chased into the next county and was killed, but it was not clear whether the police shot him or he killed himself.

Mr. Gamez said he was told by an emergency medical technician that 27 people were dead and 24 others were injured.

He said the victims were still inside the church. Sutherland Springs is a small community where everyone knows one another, he said. 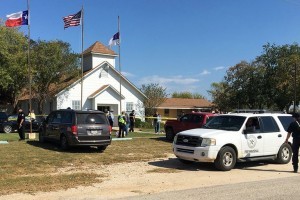 He added: “You never expect something like this. My heart is broken.”

The unincorporated community has a population that numbers in the low hundreds — the 2000 census was 362, according to the Texas State Historical Association. The preliminary death toll would amount to about 7 percent of the population.

The service at the church last Sunday, which was posted on YouTube, began with a rendition of a song called “Happiness Is the Lord.”

Then the pastor, Frank Pomeroy, told his parishioners — 20 to 30 were visible in the video — to walk around the room and “shake somebody’s hand.”

“Tell them it’s good to see them in God’s house this morning,” he said.

Devin Keen, a constable in Wilson County, said “there were kids involved” in the shooting at the church. 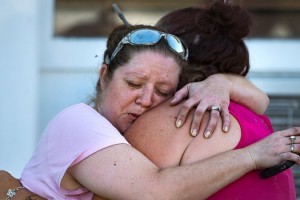 Megan Posey, a spokeswoman for Connally Memorial Medical Center in Floresville, Tex., said that she did not know exactly how many patients the hospital had received, but that it was continuing to receive more.

The hospital has activated its emergency response team, she said. Information about the conditions of patients was not immediately available.

“We’re sending more officers on the streets to help secure Connally Memorial while they’re bringing the casualties to the hospital,” Constable Keen said.

Joseph Silva, 49, who lives about five miles northeast of Sutherland Springs, said the police had instructed his family and neighbors to stay indoors.

In a phone interview on Sunday afternoon, he described Sutherland Springs as “a one-blinking-light town.”

“There is a gas station and a post office,” he said. “That’s about all there really is.”

Mr. Silva said he had been approached by a woman who said she had two loved ones at the church who were shot.

“There are a number of individuals just weeping and just wanted to know what’s happened to their loved ones,” he said. “Everybody is pretty grief-stricken. Everyone’s worried.”

The First Baptist Church of La Vernia, Tex., about seven miles away, wrote on Facebook that it would open its doors from 5 to 7 p.m.

“Today an unthinkable tragedy occurred in our community,” the church wrote. “There will be Pastors and leaders present to pray with you or to talk, and the altar will be open for us to fall at the feet of Jesus.”

President Trump, who was in Japan on a trip to several Asian countries, offered his support.

Ken Paxton, the attorney general of Texas, said in a statement: “The thoughts and prayers of all Texans are with the people of Sutherland Springs as tragic reports come out of First Baptist Church. My office stands ready to assist local law enforcement as needed.”

On Facebook, a user described the church: “It is such a warm and welcoming church that is truly filled with the Holy Spirit and shows real Christian love and friendship.”