President Trump recently claimed that the U.S. has the best air in the world, which according to the Environmental Performance Index is untrue. President Trump has made several false claims about the environment throughout his presidency, ranging from the side effects of wind turbines to the elevated state of clean air in the United States. At the same time, President Trump and his administration have rolled back 22 distinct environmental regulations that help control air pollution and emissions.

Based on the the Environmental Performance Index, a metric created by Yale and Columbia, the U.S. sits 10th in the world in terms of air quality. Australia, Barbados, Jordan, and Canada all have cleaner air according to the index. While ranking and comparing air in different countries is difficult given how air moves past borders and boundaries, the EPI looks at indicators like household solid fuels, chronic exposure to particle matter that is 2.5 parts per million or higher, and the percent of a nation’s population that is exposed to air with particle matter that exceeds 2.5 ppm.

France, the United Kingdom, and Germany all ranked much lower than the United States, falling to 13th, 18th, and 46th place respectively. Overall, aggregate emissions of the six most common air pollutants in the U.S. dropped by 73 percent since 1970. While the trend has been positive since the 1970s and the U.S. does rank higher than those three countries, the U.S.’s air quality has been veering down recently, according to the American Lung Association. 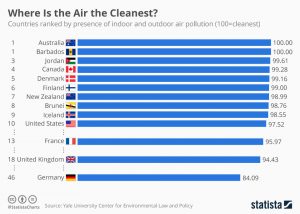