It is a dispute that will continue

Women’s soccer has surged in popularity in recent years and the global viewing audience for the 2019 FIFA Women’s World Cup is expected to reach one billion. The growing profile of women’s soccer has resulted in enormous controversy due to a massive disparity in pay and prize money compared with male soccer.

Even though FIFA announced it was doubling total prize money at the 2019 FIFA Women’s World Cup from $15 million to $30 million, it is nothing compared to the total pot 32 teams competed for at the men’s World Cup last year in Russia. Total prize money on offer at the 2018 FIFA World Cup was $400 million which means the gender gap at the women’s tournament this year is an incredible $370 million.

When France beat Croatia in last year’s men’s final, they took home $38 million in prize money which is more than the 24 women’s teams are currently competing for. The winning team at the women’s World Cup will only pocket $4 million. The huge gulf in prize money has unsurprisingly resulted in players questioning the situation. World Cup-winning former U.S. goalkeeper Hope Solo has been especially vocal and she recently told the BBC that “male chauvinism in entrenched in FIFA and that these disparities are a reflection of that”.

Solo is leading a lawsuit against the U.S. Soccer Federation over equal pay but she is not the only woman taking action. The Australian player’s union called on FIFA to reward male and female players equally while the Nigerian team staged a sit-in protest at a hotel after winning the 2016 Women’s Africa Cup of Nations over outstanding payments. Norway’s Ada Hegerberg won the Ballon d’Or and she famously quit international soccer in 2017 due to the way her country’s football federation treats female players. Even though it subsequently agreed to pay male and female players equally to represent Norway, Hegerberg declared that there’s “still a long way to go” and she refused to make herself available for the current World Cup in France. 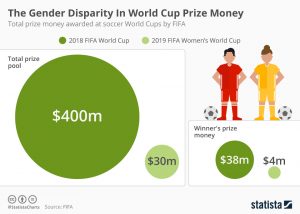