Shootings have already started in Konitsa

The life of Saint Paisios, a modern Greek monastic will be turned into a TV series, with on location shootings in Konista, western Greece already underway.

The TV series will include two seasons and is a Greek-Cypriot production, which will feature a cast of top actors/actresses such as Nikitas Tsakiroglou, Smaragda Smyrnaiou, Christina Pavlidou, Dimitris Drossos and Dimitris Smyrnaiou.

Shooting will also take place in Athens and Ioannina and will last throughout September.

The series, which will most likely be aired on Cosmote TV, is directed by renowned director Stamos Tsamis (Kings, Brusco, Tattoos).

The municipality of Konitsa, a town of Ioannina in Epirus embraced the whole project from the outset after meeting with the production team of the series, a few months ago, facilitating the crew in all posible ways.

Mosque in Athens to reportedly open its doors in October

Saint Paisios of Mount Athos, born Arsenios Eznepidis (1924–1994), was a well-known Greek Eastern Orthodox ascetic from Mount Athos, who originated from Pharasa, Cappadocia. He was respected for his spiritual guidance and ascetic life and many people worldwide highly venerate Elder Paisios, especially in Greece and in Russia.

Elder Paisios was canonized on 13 January 2015 by the Holy Synod of the Ecumenical Patriarchate, and the church commemorates his feast day on July 12.

A number of geopolitical prophecies have been attributed to Saint Paisios, including the prediction that a war between Turkey and Russia will lead to a restoration of a Greater Greece, including Albania, Macedonia, and Byzantium (Constantinople), and the conversion of a part of the Turks from Islam to Orthodox Christianity. 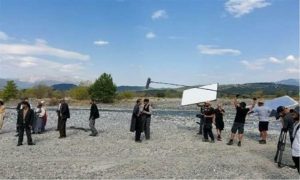