Yemen is the least stable country in the world

Amid Brexit, the unpredictability of Trump’s presidency ongoing conflicts in Yemen and Syria and countless other factors, the world is becoming less stable and increasingly fragile. Given the situation in 2019, the results of The Fund For Peace’s Fragile State Index is particularly interesting this year. Yemen has been named the most fragile state, ahead of South Sudan and Syria.

Considering the political situation in both three countries their place at the top of the index is hardly surprising. What is particularly interesting this time around is the list of the countries who saw their score increase the most. This includes Venezuela which is struggling with an economic and leadership crisis of unprecedented dimensions. Brazil’s score worsened by the same margin after it elected a new controversial president known for his harsh right-wing rhetoric.

The UK, which is mired in a complicated divorce process with the EU, had the fourth highest increase in the index. Finland was named the least fragile country worldwide in 2019, ahead of Norway and Switzerland. 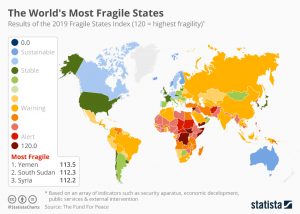