The Imam made reference to the Palestinians in Israel

Thousands of Muslims descended on the Hagia Sophia, which converted to a Mosque last year, and took part in the group prayer, Eid al Fitr led by Ali Erbas, the country’s supreme imam and president of Directorate of Religious Affairs in Turkey.

This is the first year that Bayram is celebrated in Hagia Sophia after Erdogan’s decision to turn the iconic structure, previously an Orthodox Christian Church and a museum, into a mosque.

Erbas set the stage for prayer, holding a sword in his hand, a symbol of conquest, honouring the Muslim tradition.

“These celebrations take place at great times and define us, unite our hearts and strengthen our brotherhood,” he said in his message.

He prayed for the Palestinians, who are “under heavy attack by Israeli forces.”

“Our innocent Palestinian brothers and sisters are being forcibly evicted from their homes and massacred,” he said.

Hundreds of Muslims gathered in the Hagia Sophia courtyard to pray.

The Speaker of the Turkish Parliament, Mustafa Sentop, was also present at the first prayer of the Muslims. 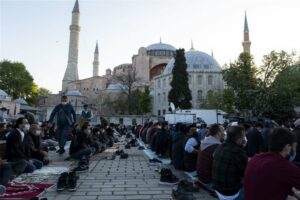 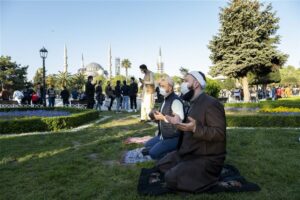 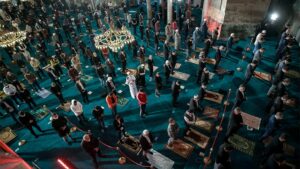