Could lead archaeologists to rethink evolution of society

According to a report in The Times of Israel, a small-scale silo has been unearthed at Tel Tsaf, in Israel’s Jordan Valley, by an international team of archaeologists led by Danny Rosenberg of the University of Haifa. “It’s really uncommon and doesn’t look like any vessel we have,” Rosenberg explained. The 7,200-year-old vessel was found in a room that is thought to have been connected to a burial complex, where the large bases of wheat and barley storage silos were found, along with thousands of seeds. The small vessel may have been a model for the construction of full-sized silos, and may have also been used in rituals connected to the successful storage and preservation of grain, to burial, and to regeneration of life. Pieces of ritual figurines, copper items, a shell imported from Egypt, and imported obsidian artifacts were also recovered. The one-of-a-kind pottery vessel testifies to a previously undiscovered religious — and perhaps even political — side of food storage for this era in the ancient Near East, according to the international team of archaeologists from the University of Haifa and the German Archaeological Institute, Berlin. 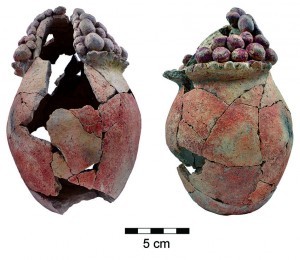 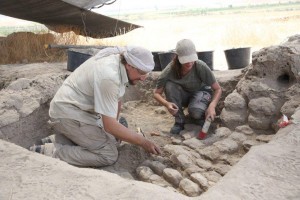