THIS is the shocking moment a mass bar brawl broke out as punters beat each other senseless.
The chaotic scenes show scored of grown men throwing punches as music plays in the background in the early hours of Sunday morning.
A police officer was struck in the face as he tried to break up the free-for-all inside The Albany Palace, JD Wetherspoon in Trowbridge, Wiltshire.
Footage of the men coming to blows has already been viewed more than 500,000 times.
Tommy Arkle, who uploaded a clip of the fist fight to Facebook on Sunday morning, said the night got “way out of hand”.
Caught in the crossfire was 22-year-old Nick Smith who told the The Sun Online: “Everything is a blur because it happened so quickly.
“I was walking to the bar when everything just went mental.
“The last thing I remember is being punched in the eye and then being bottled.
“I’ve got a slashed eye and two lumps on my head.” 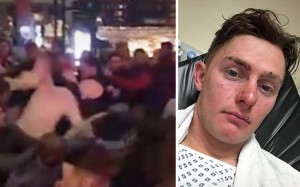 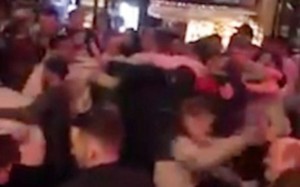 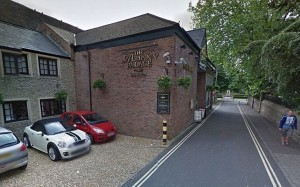