The U.S. Supreme Court on Monday ruled in favour of a Colorado baker who had refused to create a wedding cake for a gay couple, who argued this didn’t conform with his religious principles. According to a poll by the non-partisan Public Religion Research Institute (PRRI), “most religious groups do not believe small business owners should be allowed to refuse service to gay and lesbian people for religious reasons.”

Only a majority of white evangelical Protestants and Mormons believe small business owners in their state should be allowed to do so on religious grounds. The Unitarians/Universalists seem to be the most tolerant. 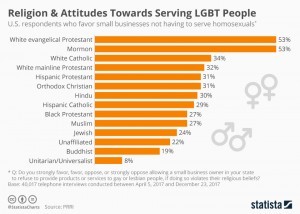