Metropolitan Cleopas Strongylis of Sweden and All Scandinavia was elected as one of the two Vice Presidents of the Conference of Europe Churches General Assembly. The participants also elected a president, Rev. Christian Krieger, while the other Vice President chosen was the Rt Rev. Dr Gulnar Francis-Dehqani.
“The most important aspect of our work should be working united as the body of Christ for a better tomorrow, for a better Europe and especially for our youth, to make sure that they fully participate,” said the Metropolitan. Cleopas was elected Metropolitan of Sweden and All Scandinavia and ordained into the episcopacy in 2014 by His All Holiness Ecumenical Patriarch Bartholomew.

Metropolitan Cleopas’ election was well received by the Member Churches of CEC, whose delegates hastened to congratulate him and wish him a “fruitful ministry” in his new office, which carries many responsibilities. Metropolitan Cleopas thanked the delegates present at the General Assembly for their trust and expressed his gratitude to His All-Holiness Ecumenical Patriarch Bartholomew, for recommending him to the Governing Board of CEC, praising also the many-year contribution of Metropolitan Emmanuel to CEC, and pledging to work on behalf of bearing witness to Christ in Europe and facing modern challenges, as well as promoting the work of the Mother Church of Constantinople.

Representing the Ecumenical Patriarchate at the Assembly were His Eminence Metropolitan Cleopas of Sweden and All Scandinavia, Head of the Delegation, His Grace Bishop Makarios of Christopolis, Mr. G. Jovic, and Ms. Yvonne Vinga, Members, the Very Rev. Archimandrite Agathangelos Siskos, Bibliophylax of the Patriarchate, and Ms. Katerina Tsavdaridou, Advisors.
Also in attendance at the General Assembly were the Vice-President of CEC His Eminence Metropolitan Emmanuel of France, His Eminence Metropolitan Athenagoras of Belgium, and the V. Rev. Archimandrite Maximos Pafilis, a clergyman of the Metropolis of France.
The regional ecumenical body is a fellowship of some 116 Orthodox, Protestant, Anglican, and Old Catholic Churches from across Europe. It also includes 40 national councils of churches and partner organisations. It celebrates its 60th anniversary next year.
In addition to administrative and internal regulatory issues, the General Assembly touched upon contemporary issues such as immigration, human rights and xenophobia. 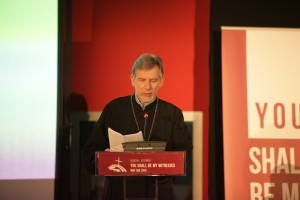 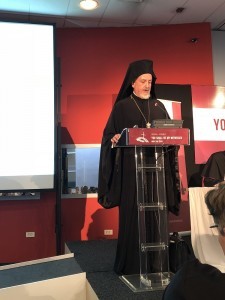 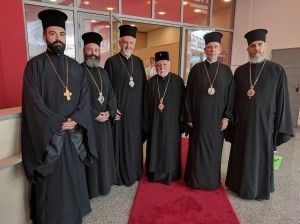 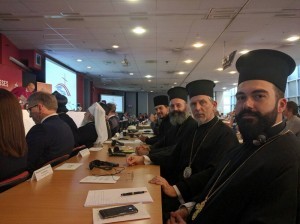 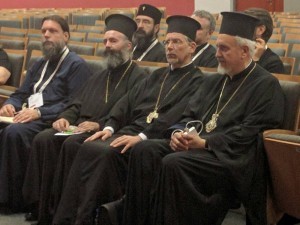 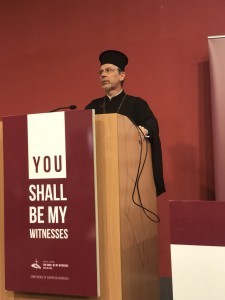 Tags With: Conference of European ChurchesMetropolitan Cleopas of Sweden & all Scandinavia
This week‘s new events