Apparently, conspiracy theories tend to draw on some grain of truth

If you spend any time on the internet, it seems every few months humanity is faced with a looming existential threat from the depths of space. Planet X/Nibiru, the rapture or a wayward comet are, according to conspiracy theorists, destined to destroy us.

However, there is one particular conspiracy, treasured by theorists, that our impending doom will come from within planet Earth – that lurking beneath America’s Yellowstone National Park is a supervolcano that will kill us all.

Yellowstone, in the midwestern US, is – they claim – about to erupt and send unfathomable amounts of matter into the sky, covering anyone in the vicinity in a pyroclastic flow of ash and rock, and blocking out the sun, wiping out almost all life on Earth in the process. 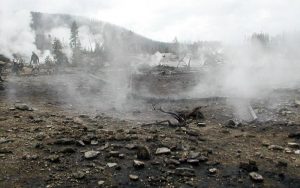 Conspiracy theories tend to draw on some grain of truth. The supervolcano really has erupted before, three times in fact, over the last 2 billion years or so, but the theory goes that it’s bound to do so again soon, right? RT.com caught up with Michael Poland, Scientist-in-Charge at the Yellowstone Volcano Observatory, to find out the full extent of this lurking supervolcanic ‘threat.’

Poland specializes in volcano geophysics, particularly in how volcanoes change and behave over time. Using GPS, satellites and other methods, he studies how the surface of Yellowstone National Park moves to figure out what’s happening below. 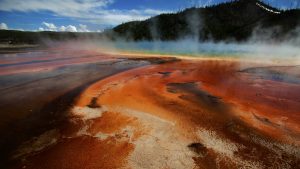 Firstly, what is a super volcano?

“Supervolcanos, or super eruptions, are these eruptions that are on the eruption intensity scale, there’s something called the volcano explosivity index (VEI) and eruptions that have a VEI of eight are considered super-eruptions. And that’s pretty massive, most eruptions that we see would be VEI three, four. Big ones are five and then once a century or so there’s a six, so a VEI eight is really, really tremendous.”