There is a huge disparity in employment rates among over 65s across different countries. According to OECD data, the highest rates of people working beyond 65 are found in Asia with Indonesia particularly notable as having a 56 percent labor participation rate among those in the 65-69 age group. That figure is high elsewhere in Asia, standing at 47.6 percent in South Korea and at the same rate in Japan. In contrast to Europe where there were widespread protests when the retirement age was raised even slightly, much of Asia has actually been supportive of increases in the mandatory retirement age. Reasons for support include everything from a desire to maintaining a fit and active life to more obvious concerns about finances.

New Zealand has no compulsory retirement age and it is another country with a high labor participation rate among older people with almost 45 percent of those aged 65 to 69 still working. The rate is far less in Australia at 29 percent while it’s 33 percent in the United States. In Europe where all those protests happened, the rate is lower still. In the United Kingdom, the labor participation rate for 65 to 69-year-olds stands at 21.7 percent while in France and Spain, it is only 6.7 and 6.4 percent, respectively. 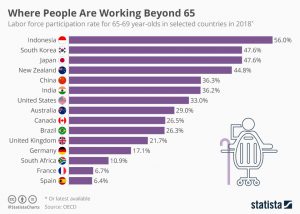