With Easter the consumption rises

Easter marks the end of lent and for many people, that results in a major chocolate binge. In Europe in particular, sales of chocolate eggs and rabbits skyrocket in the days before Easter Sunday. In Germany, the shevles are especially well stocked with varieties of every type of chocolate rabbit imaginable.

Germany is the EU’s biggest chocolate producer, accounting for 1.3 million tonnes in 2017 or 32 percent of the total, according to Eurostat. Italy comes second with 0.7 million tonnes (18 percent) while France and the Netherlands both followed with 0.4 million tonnes (9 percent) each. 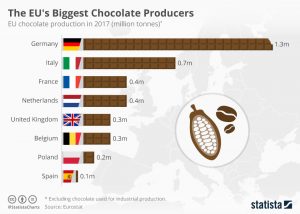