While fabricated news stories have a long, harmless (and some say amusing) history on April 1, it sometimes seems like every day is April Fool’s Day on the internet. Popular online platforms such as Facebook and Twitter are rife with fake news and the companies behind them are struggling to stay ahead of bad actors trying to abuse their platforms to manipulate public opinion.

Facebook’s CEO Mark Zuckerberg even went as far as calling for more regulation on the internet to help limit hate speech, protect elections and harmonize data protection policies. In a Washington Post op-ed published this weekend, Zuckerberg acknowledged that companies such as Facebook have “immense responsibilities” and “should be accountable for enforcing standards on harmful content”. In order to effectively protect users from harmful content, Zuckerberg calls for a more standardized approach, however, suggesting “a more active role for governments and regulators”.

While calls for more regulation of major internet companies have grown louder in recent years, the American public remains skeptical of the government getting involved in policing online content. According to a poll conducted by Gallup on behalf of the Knight Foundation, 46 percent of U.S. adults think that internet companies are most responsible for spreading only accurate and unbiased news while only 16 percent see the government as most responsible. Interestingly, 38 percent of those polled think that the users themselves should be able to distinguish between fake and accurate news stories. 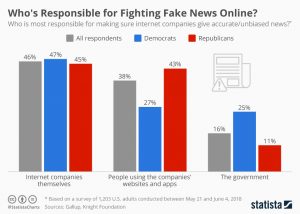