The country is in a festive mood for the 200th anniversary of the Revolution of 1821, as the two-day celebrations with high attendances of March 25th have started early in the morning and they are expected to culminate tomorrow with the military parade.

In fact, Prince Charles and the Duchess of Cornwall Camilla have landed on Greek soil. The couple was welcomed on behalf of the Greek government by Foreign Minister Nikos Dendias, while the British Ambassador to Athens Kate Smith was also present. 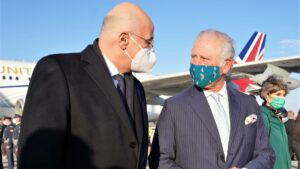 At the same time, the blue and white Greek flags are waving from one end of the country to the other, although the celebration for the 200th anniversary of the Revolution of 1821 is somewhat different than what was imagined it would be, due to the coronavirus pandemic and which will not allow the Greek people to be present and watch first hand the magnificent parade that has been planed. 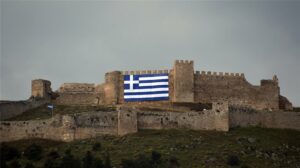 Nevertheless, the government’s goal is to highlight the high symbolism for the 200 years since the Revolution.

Thus, this year’s celebration will take place with the magnificence required by the occasion, honoring the heroes of 1821 and at the same time, sending a message of unity and solidarity to all Hellenism, but also to the entire planet, which turns its eyes again on our country.

At the same time, an important page in the history and culture of Greece was written with the arrival of the high guests in the impressive, completely renovated complex of the National Gallery, which officially opens its gates for the first time, today, on the eve of the 200th anniversary years since the Greek Revolution. 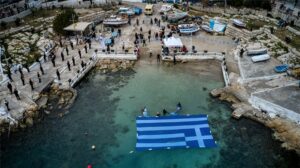 In this way, our top National Anniversary meets the completion of a flagship project, a cultural vision that, after years, has finally become reality, a modern ark of art worthy of world admiration.

Prime Minister Kyriakos Mitsotakis and his wife Mareva Grabovski welcomed their guests at the National Gallery. The first to arrive was the Prime Minister of the Russian Federation Mikhail Mishustin followed by Prince Charles and the Duchess of Cornwall. Immediately after, the President of the Republic of Cyprus Nikos Anastasiadis and his wife Andri Anastasiadis and the President of the Republic Katerina Sakellaropoulou. 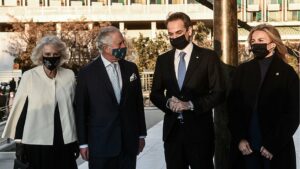