The Fall of Constantinople occurred on May 29, 1453, after a siege which began on April 6. The battle was part of the Byzantine-Ottoman Wars (1265-1453) and is referred to as one of the darkest days in Greek history.

Ascending to the Ottoman throne in 1451, Mehmed II began making preparations to reduce the Byzantine capital of Constantinople.

Reduced to the area around the city as well as a large part of the Peloponnese in Greece, the Empire was led by Constantine XI. Already possessing a fortress on the Asian side of the Bosporus, Anadolu Hisari, Mehmed began construction of one on the European shore known as Rumeli Hisari. 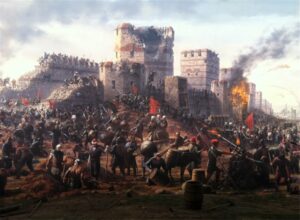 Effectively taking control of the strait, Mehmed was able to cut off Constantinople from the Black Sea and any potential aid that might be received from the Genoese colonies in the region. Increasingly concerned about the Ottoman threat, Constantine appealed to Pope Nicholas V for aid. Despite centuries of animosity between the Orthodox and Roman churches, Nicholas agreed to seek help in the West. This was largely fruitless as many of the Western nations were engaged in their own conflicts and could not spare men or money to aid Constantinople.

While Mehmed tightened the noose around Constantinople, elements of his army swept through the region capturing minor Byzantine outposts. Employing his large cannon, he began battering at the Theodosian Walls, but with little effect. As the gun required three hours to reload, the Byzantines were able to repair the damage caused between shots.

As initial assaults against the Theodosian Walls had repeatedly failed, Mehmed ordered his men to begin digging tunnels to mine beneath the Byzantine defenses. 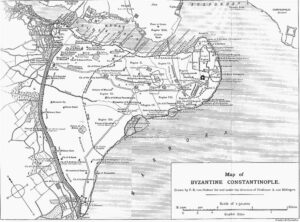 Constantinople began to plummet as word was received that no aid would be coming from Venice. In addition, a series of omens including a thick, unexpected fog which blanketed the city on May 26, convinced many that the city was about to fall. Believing that the fog masked the departure of the Holy Spirit from Hagia Sophia, the population braced for the worst. Frustrated by the lack of progress, Mehmed called a council of war on May 26. Meeting with his commanders, he decided that a massive assault would be launched on the night of May 28/29 after a period of rest and prayer.

Shortly before midnight on May 28, Mehmed sent his auxiliaries forward. Poorly equipped, they were intended to tire and kill as many of the defenders as possible. These were followed by an assault against the weakened Blachernae walls by troops from Anatolia.

These men succeeded in breaking through but were quickly counterattacked and driven back. Having achieved some success, Mehmed’s men attacked next but were held by Byzantine forces under Giustiniani. The Byzantines in Blachernae held until Giustiniani was badly wounded. As their commander was taken to the rear, the defense began to collapse.

To the south, Constantine led forces defending the walls in the Lycus Valley. Also under heavy pressure, his position began to collapse when the Ottomans found that a small service castle door, known as the Kerkoporta, to the north had been left open. With the enemy surging through the gate and unable to hold the walls, Constantine was forced to fall back. Opening additional gates, the Ottomans poured into the city.

Though his exact fate is not known, it is believed that Constantine was killed leading a last desperate attack against the enemy. Fanning out, the Ottomans began moving through the city with Mehmed assigning men to protect key buildings.

Having taken the city, Mehmed allowed his men to plunder its riches for three days.

Ottoman losses during the siege are not known, but it is believed that the defenders lost around 4,000 men. A devastating blow to Christendom, the loss of Constantinople led Pope Nicholas to call for an immediate crusade to recover the city.

Despite his pleas, no Western monarch stepped forward to lead the effort. A turning point in Western history, the Fall of Constantinople is seen as the end of the Middle Ages and the beginning of the Renaissance. Fleeing the city, Greek scholars arrived in the West bringing with them priceless knowledge and rare manuscripts.

Following the Fall of Constantinople, Hagia Sophia was turned into a mosque.

The loss of Constantinople also severed European trade links with Asia leading many to begin seeking routes east by sea and keying the age of exploration. For Mehmed, the capture of the city earned him the title “The Conqueror” and provided him with a key base for campaigns into Europe.

Throughout the centuries, though, echoes the answer Constantine XI Palaiologos’ gave to Mehmed when the Ottoman Sultan demanded from the Byzantine Emperor to surrender Constantinople:

“To surrender the city to you is beyond my authority or anyone else’s who lives in it, for all of us, after taking the mutual decision, shall die out of free will without sparing our lives”