Last October, Swiss archaeologists were presented with a momentous and possibly history-making discovery: a bronze hand with a gold cuff glued to its wrist, alongside what appeared to be a withered dagger and a human rib.

Placed in the stead of the Bern Archaeological Service by two treasure hunters who made the discovery near the municipality of Prêles, the antiquities confounded experts. After conducting tests, the hand’s provenance and significance came into sharper focus. Radiocarbon dating indicates the hand is 3,500-years-old, with its origins dating between 1500 to 1400 BCE. 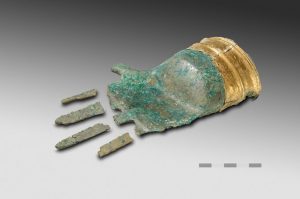 A genuine artifact of Europe’s Bronze Age, the hand is consequently the “oldest bronze piece representing a part of the human body” ever discovered, per a press release. The dagger blade was determined to be a similar age.

Adding an air of mystique to the find, scientists have dubbed the relic “The hand of Prêles.” 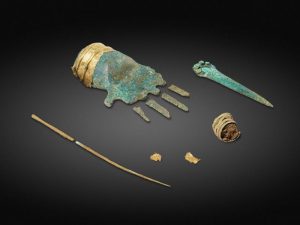