Erdogan thumbing his nose at the Europeans

As Greece and Turkey have agreed on principle to commence exploratory talks to de-escalate tensions in the southeastern Mediterranean region, it seems Turkish President Tayyip Erdogan is bent on continuing his provocative acts against Greece, following the issuing of the latest NAVTEX for the research vessel Oruc Reis south of the Greek island of Kastellorizo.

The latest Turkish provocation effectively vindicates the Cypriot spokesperson, who told EU leaders that Turkey could not be reasoned with only by ‘pleading’.

The Oruc Reis is expected to enter the Greek continental shelf a little after 5pm on Monday, escorted by a fleet of Turkish warships after it sailed out of the port of Antalya. The ship is expected to reach 6.5 nautical miles off the coast of the Greek island at 8pm. 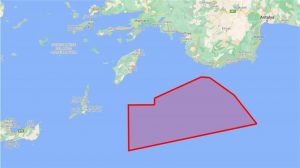 The President of Turkey is sending a double message: That he will not allow Greece to establish any kind of influence around the island of Kastellorizo ​​in terms of sea zones other than 6 nautical miles from the coast of the island; and that he will block any thoughts of expansion of Greek territorial sea in the Eastern Mediterranean up to 12 nautical miles.

The World’s Most Dangerous Countries For Workers (infographic)

In terms of politics and diplomacy, Tayyip Erdogan appears to be openly challenging the Europeans, even thumbing his nose at them, one might say: Today, as the day the Oruc Reis sailed for seismic surveys in Kastellorizo, European foreign ministers are meeting in Luxembourg, while the German Foreign Minister is scheduled to visit Athens and Ankara to mediate for a resumption of the exploratory talks, while an EU summit is set to convene on Thursday.

It is estimated that the Turkish research will take about 3-4 hours. along with its escorting ships Ataman and Cengiz Han and the fleet of Turkish warships moving with them to the nearest research area -about 6.5 nautical miles- from Kastelorizo ​​and just 20 miles from Rhodes.

The Greek navy is on alert and is mobilising its vessels to respond to any provocations. Greek warships have sailed from the ports and are moving to the area where the Turks have stated that they will conduct seismic surveys. The crucial question is whether the Oruc Reis will be laying underwater cables as early as Monday night, or whether Tayyip Erdogan has other plans, and when he might try to put them into action.