PM Mitsotakis said a ‘vaccinated citizen is a responsible citizen’

The President of the Republic Katerina Sakellaropoulou will receive in the garden of the Presidential Mansion political leaders, ministers, deputies, dignitaries from the Arts and Culture, as well as guests from the field of health on the occasion of the celebration for  “The Restoration of Democracy” in Greece. Covid ICU directors, infectious disease specialists from the National Committee of Experts, doctors from remote islands, doctors, nurses, and members of the Armed Forces from the vaccination centres, and voluntary blood donors have also been invited.

The President chose personalities from the whole spectrum of Civil Society. Scientists who develop pioneering technologies in the fields of Environment, Health, Genetics. Professionals from the productive sector of the economy who have stood out in Greece and abroad, such as winemakers, craftsmen, and farmers. Teachers of schools from the hinterland and remote islands, who were challenged by implementing long-distance education as well as students who excelled in the Panhellenic Examinations. Athletes but also refugees and immigrants, who have managed to integrate into Greek society.

Representatives of Women’s Organisations, Social Welfare Structures for Victims of Violence, and Minority Protection were also invited, as well as the members of the Committee for the Formulation of a National Strategy for Equality of LGBTQI +. 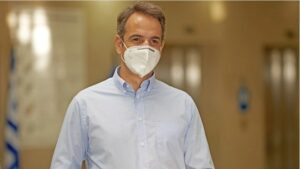 Mitsotakis: Science must not be challenged

On the occasion of the day, PM Mitsotakis stated: “Our democracy is stronger than ever. It stood up against the waves of populism.”

On the 47th anniversary of the restoration of the Republic he added that in the 21st century, science is not allowed to be challenged and that refusal to vaccinate means refusal to health.

At a time when controlling the pandemic is a bet for the government, Mitsotakis pointed out, among other things, that “personal behaviour is emerging as a catalyst for social success, the message is clear: A responsible citizen is a vaccinated citizen.”