Vacations at the Aegean Sea

Greece is blessed with one of the most beautiful seas in the world — the Aegean Sea. One of the must activities to include in your holiday itinerary on Mykonos is a day trip to Delos and Rhenia islands with Mykonos on Board. We joined Artemis and Leonidas on a memorable sailing trip and enjoyed a day of fun, sunshine and fantastic Greek hospitality.

Mykonos on board specializes in organized private and semi-private day tours around Mykonos and the nearby islands of Delos and Rhenia. At 11 am we met Artemis at the little harbor of Agios Ioannis and once we boarded his sailing yacht together with six other travellers who ended up being the coolest crowd, we were ready to sail away. 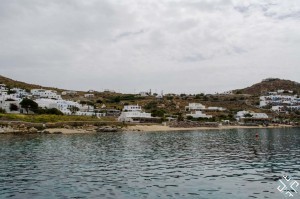 Delos — The Centre of the Cyclades archipelago

As we sailed passed Delos, we marvelled at the historical remains of the mythological birthplace of Artemis and Apollo. It is here that Zeus’ favorite lover Leto thanks to the generosity of Poseidon had found her refuge after Hera the wife of Zeus banned her from earth.

(The remains of ancient temples on Delos)

We listened to Artemis sipping on a refreshing glass of white wine as he explained the history of the most important mythological, historical, and archaeological sites in Greece and how it served as a prominent religious and economic centre.

Rhenia island — a sparking jewel of the Aegean Sea 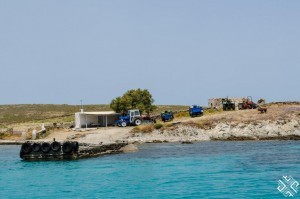 (The only means of transportation on Rhenia are the tractors)

The uninhabited island of Rhenia is a natural wonder, separated from the sister island of Delos by a small strait. During the ancient times it was the burial ground for warriors who died on Delos and today its only inhabitants are sheep. As we approached the island, Artemis anchored the sailing boat so that some of us could enjoy a refreshing swim in the azure waters, while Artemis and Leonidas prepared a delicious lunch on board.

Lunch on board — Greek gastronomy highlights 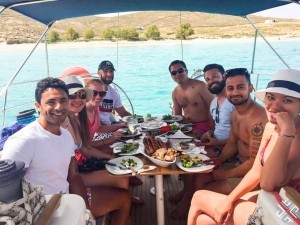 Our hosts really impressed us with their cooking skills.  We dined, we wined and had the best time ever with our newly made friends — Rachel and Julian from the US and four young doctors from Sweden — Omeir, Minhaal, Petros and Majd. It is really beautiful when strangers become friends.

We returned to the harbor in the afternoon with beautiful memories of sailing to Delos and Rhenia islands, but best of all was the warm hospitality and the fantastic vibe which we received from Artemis and Leonidas of Mykonos on Board. 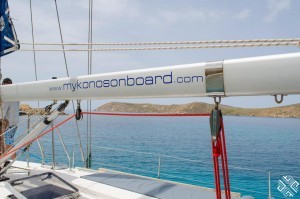