Egyptian President Abdel Fattah al-Sisi drew the attention of Athens and Nicosia to the Islamic terrorism and the way it is part of Tayyip Erdogan’s plans.

According to a confidential briefing by the President of Egypt to his Cypriot counterpart Nikos Anastasiadis and the Greek Prime Minister Kyriakos Mitsotakis, published by the newspaper “TA NEA”, Cairo is particularly concerned not only about Ankara’s involvement in all regional conflicts, but mainly about the way in which the Erdogan now engages and openly uses the Islamist factor.

Thus, during the recent, 8th Tripartite Summit of Cyprus – Greece – Egypt, Al Sisi conveyed to his two counterparts the message that this issue is extremely important for Egypt, asking them to keep it high on their diplomatic agenda.

The Egyptian President pointed out to the Greek and Cypriot leaders the message that this issue, concerning the front in Libya, the very internal security of Egypt and the crucial control of the Islamists in his country but also in the wider region, is of great importance to Cairo.

Russian Foreign Minister Sergey Lavrov to be in Athens on Monday, October 26th 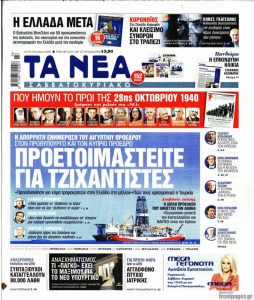