Gun lobby groups are taking aim at nation’s strict arms controls ahead of next year’s election, with independent voters who could swing the result in their sights

Firearms suppliers and recreational shooters are taking aim at Australia’s strict gun controls as the countdown begins to a general election, with independent voters who could swing the balance of power in their sites.

Positioned against them are advocates for even tighter restrictions who say gun laws are facing their greatest threat since they were enacted in 1996 after 35 people died in the country’s worst ever mass shooting incident.

The Shooting Industry Foundation of Australia (SIFA), which represents major firearms wholesalers, is giving money to politicians and small factions to lobby for changes in the National Firearms Agreement (NFA), including for the importation and licensing of more powerful weapons.

Backed by groups like the Sporting Shooters Association of Australia (SSAA), the organization insists it is only trying to foster more debate.

“We want governments to be held accountable for the decisions they make,” SIFA spokeswoman Laura Patterson said in a media interview. “We’re looking to enter a new era of engagement. We want people to understand who we are and why we’re doing what we’re doing.”

Gun Control Australia (GCA), an independent lobby group, says it is already clear what the group is doing: it wants to water down laws that have drastically reduced the incidence of mass shootings, though there is dispute over the law’s broad achievements in reducing gun-related violence.

Adopted by federal, state and territory governments after gunman Martin Bryant opened fire indiscriminately at the Tasmanian tourist spot of Port Arthur over two decades ago, the NFA banned the use of automatic and semi-automatic weapons. One million guns were handed in and destroyed nationwide during a subsequent amnesty. 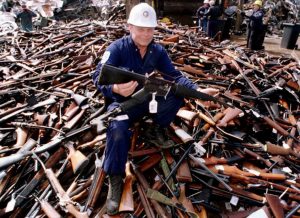 There have since been only two mass shootings in Australia, claiming a combined 12 lives. Gun-related crime has halved since 1996, but a study last month by researchers at two Tokyo universities found that the NFA had not greatly reduced the incidence of murders involving guns and their use in suicides.

Another study reported in the Journal of the American Medical Association in 2016 found that gun-related murders and suicides were already declining before the NFA started. There was a sharper drop afterward, the study showed.