The study, published in the journal Human Evolution in May 2018

The book of Genesis tells us that all of humanity is ultimately descended from just two people. Does science agree? According to the New Zealand Herald, a recent study says “maybe.”

The study was done by Mark Stoeckle and David Thaler of the University of Basel, Switzerland. They examined the “genetic barcodes” of over 5 million animals from 100,000 different species — and one of those species was humans. 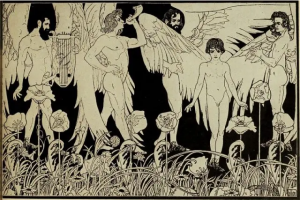 (The Creation of Man by Ephraim Moses Lilien, 1903. Book of Genesis)

Based on those barcodes, which are really just tiny bits of DNA from the mitochondria of living cells, the researchers concluded that their data are “consistent with” the hypothesis that all of humanity are the descendants of a single pair of adults who lived 100,000 to 200,000 years ago, writes the Herald.

The study showed that there is very little genetic diversity among humans when you look at our mitochondrial DNA. Mitochondrial DNA is a part of our genetic code that is passed to us from our mothers and it doesn’t mix with our nuclear DNA, making it possible to trace a direct maternal genetic line.