The tongue, found at a temple on the outskirts of Alexandria, Egypt, was probably meant to help the deceased speak in the afterlife, experts said

Archaeologists working at a temple on the outskirts of the Egyptian city of Alexandria have found 16 human burial chambers there, the government’s ministry of tourism and antiquities announced on Friday.

At least one contained a human skull with a golden tongue nestled in its jawbone.

The tongue was made of gold foil, according to a statement from the ministry, which added that it was meant to ensure that the deceased person would be able to “speak in the afterlife.”

It was discovered at the temple of Taposiris Magna, which is on the southwestern outskirts of Alexandria, on Egypt’s Mediterranean coast. Archaeologists found other golden artifacts, too, including a funeral mask with golden flakes arranged in the shape of a wreath and some gilded decorations depicting Osiris, the ancient Egyptian god of the dead.

During the time of the pharaohs, gold was often used to decorate the funereal masks of rulers like King Tutankhamen. It had also been molded to encase the fingers and toes of the dead.

Golden tongues, too, have been found in Egyptian remains before, said Jennifer Houser Wegner, a curator of Egyptian artifacts at the Penn Museum in Philadelphia, where several of these tongues are housed.

“For the Egyptians, gold was a material that had qualities of everlastingness,” Dr. Wegner said. “It never tarnished. It always shone brilliantly.”

According to the Egyptian ministry of tourism and antiquities, the tongue found at Taposiris Magna was meant to help the deceased converse with Osiris on their way to the afterlife. 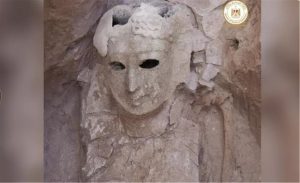 The mummies found there were not particularly well preserved. They date to a period more than 2,000 years ago, when Egypt was ruled by Greek Macedonians, and later Romans. The temple itself, according to the ministry, appears to have been built during the reign of King Ptolemy IV, a Macedonian king who ruled in the third century B.C.

Queen Cleopatra VII, who reigned for about two decades before her death in 30 B.C., was the last ruler of the Ptolemaic Dynasty before the Romans took over, and coins depicting her face have also been found in the temple.

A golden tongue would not have been uncommon in elite burials during the Ptolemaic and Roman periods, said Lorelei H. Corcoran, the director of the Institute of Egyptian Art and Archaeology at the University of Memphis.

“Within an Egyptian funerary context, its reference is to Spell 158 of the Book of the Dead, which ensures that the deceased has the ability to breathe and speak, as well as to eat and drink, in the afterlife,” Dr. Corcoran added. “It may be conflated with the Greek funerary practice of placing a coin on or in the mouth of the deceased as payment for the ferryman, Charon, who transported the deceased across the River Styx to the Underworld”.

Time: How Erdogan’s increasingly erratic rule in Turkey presents a risk to the world – Analysis

The team of archaeologists that found the 16 tombs at Taposiris Magna was led by Kathleen Martinez, a lawyer-turned-amateur-archaeologist from the Dominican Republic. The team has been working for years to find Cleopatra’s tomb, and had focused their efforts on Taposiris Magna. 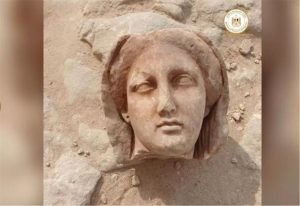 But the burial site of the famous queen, who reigned from Alexandria and was said to have died there, has not turned up there yet.

“The stated goal of the Egyptian-Dominican mission is to find the burial of Cleopatra at Taposiris Magna,” Dr. Corcoran said. “Many scholars believe, however, that the burial place of Cleopatra was within a royal burial complex, perhaps associated with the palace district, now lost underwater in the Alexandria harbor.”

Representatives of the Egyptian tourism ministry did not immediately respond to a request for more information about the 16 burial tombs at Taposiris Magna. The Egyptian newspaper Al-Masry Al-Youm reported that two golden tongues were found there and would be studied at the Alexandria National Museum before being put on display in museums across Egypt.

The latest discovery comes as Egypt is making a concerted effort to draw visitors to the country, which depends heavily on tourism. In recent years, archaeologists have unearthed more than 100 delicately painted wooden coffins at the ancient burial ground of Saqqara, a 4,400-year-old tomb with rare wall paintings near Cairo, and remnants of a colossal Pharaonic statue in the working-class neighborhood of Matariya.