Emine was carrying a French bag

Turkish President Recep Tayyip Erdogan might have strongly urged his compatriots to boycott French products, but it seems the motto “Do as I say, not as I do” could not fit more perfectly to the Turkish President.

His wife, Emine, was called out on social media, as many noticed the Turkish First lady carrying a French luxury handbag while boarding a plane. The photos posted on Twitter showed her holding a Hermes bag.

Researchers worried over new strain of Covid-19 spreading across Europe

One Twitter user wrote: “At the time when Erdogan calls for a boycott of French products, his wife is holding a Hermès bag.” 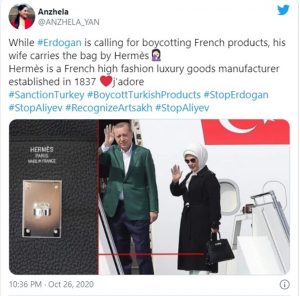