Turkish media latched on to a recent post on Facebook by Professor Antonis Liakos, a member of major Greek opposition party SYRIZA’s Political Council of the Central Committee for Reconstruction that “Macron‘s policy towards Islam is offensive” lauding his stance.

Erdogan’s hypocrisy – Do as I say, not as I do – Wife Emine carries French bag despite boycott on French products

The leftist politicians-professor wrote: “Erdogan’s statements about Macron are offensive, but so is Macron’s policy towards Islam. You can not defend freedom against terrorists by insulting millions of Muslims, one of the three most populous religions on the planet. The policy of the “clash of civilisations” is characteristic of the far right, and reinforces Islamic fundamentalism. It could be a sign of exaggeration and immaturity, but in combination with French policy in Libya, sub-Saharan Muslim Africa, Lebanon, and Syria, it seems to show the (weak) return of the colonial repressed.”

The leftist professor appears to be taking the typical, and tiresome, route of postmodernist exegesis on social issues with a strong dose of Marxist ideology. 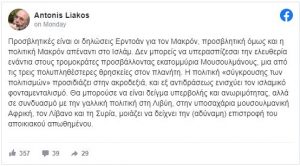 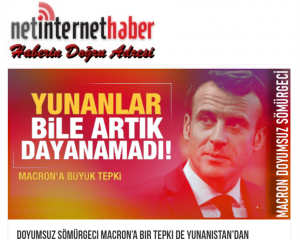 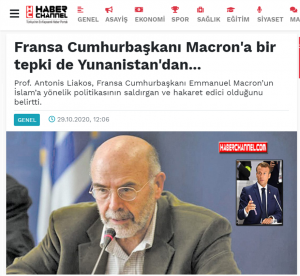