The Fire Brigade ordered the evacuation of Ancient Olympia

Firefighters continue the battle with the flames in Ancient Olympia, where a fire has been burning since noon, destroying houses and properties.

The aim is to keep the fire out of the city as well as to limit the front in Pelopio.

160 firefighters, 50 vehicles, 6 groups of infantry units are operating in the area, which continue to give a difficult battle.

During the emergency briefing, Deputy Minister of Civil Protection Nikos Hardalias announced that seven fires broke out almost simultaneously, of which 4 in the area of ​​Ancient Olympia.

The authorities’ efforts are focused on limiting the front in Pelopio, where its area is estimated at 1 km.

The Fire Brigade ordered the evacuation of Ancient Olympia.

The citizens were called to move away towards Mouria, Ancient Pisa and the Tripoli- Olympia highway.

Buses went to the area, removing citizens who do not have their own vehicle, while the evacuations have been completed, according to the Fire Department. 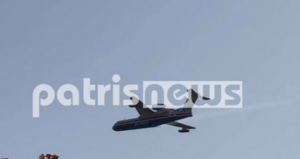 The Minister of Citizen Protection Michalis Chrysochoidis and the Minister of Culture and Sports, Lina Mendoni, who want to have direct supervision of the situation at the archeological site, went to Ancient Olympia.