The Prime Minister stressed that as soon as the fire is brought under control, the assessment of the damages will begin

The Greek Prime Minister, Kyriakos Mitsotakis and the Deputy Minister of Civil Protection, Nikos Hardalias made statements after the extraordinary meeting at the Mobile Coordination Center for Operations “Olympus” in Varybombi.

According to the Prime Minister, the men and women of the Fire Brigade did important work in a large fire in the extreme heat.

“We had a very difficult night. I hold as a positive that we have not had any loss of human life. The evacuation system worked perfectly. The critical infrastructures endured. The houses will be rebuilt”.

The Prime Minister stressed that as soon as the fire is brought under control, the assessment of the damages will begin.

He also added that the efforts will continue as the heatwave will continue, closing with the wish “the damage to be as small as possible”. 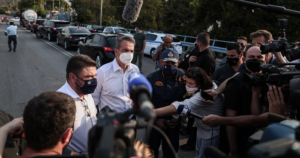 Earlier, Nikos Hardalias in his statements stressed that last night was extremely difficult, but noted that the work done by the hiking fire fighting teams bore fruit.

As he said, out of the four active fronts, only one is left, emphasizing that at the moment there is a lot of work to be done in the ravines that are located in the area.