A fire has broken out in the Greek island of Andros. Firefighters and volunteers fight the flames since early in the morning.

A large and “difficult” fire in low vegetation is in progress in the area of Remata Andros.

There are 15 firefighters operating in the area with five vehicles and 2 aircraft, while a group of the airborne 1st EMAK unit was mobilized and will be deployed by helicopter. Volunteers provide assistance.

The mayor of Andros, speaking on THEMA 104.6 fm, spoke about an uncontrollable fire front burning low vegetation.
The villages of Remata and Ateni were evacuated as a precaution. Residents of the villages of Arni and Katakoilo have been instructed that if and when needed they should be ready to evacuate their homes, as the fire appears to be heading there.
According to the information so far, the fire is located near the settlements and burns low vegetation, but has not caused damage to houses.
The causes of the fire remain unknown and will be investigated. The information that the fire started from a car that caught fire in the early hours of the morning is not confirmed, as it happened in another area.

The minds of plants: The cognitive capacities of our vegetal cousins are all around us 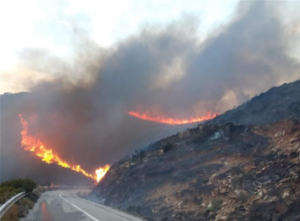 A firefighter was transported with burns to the Andros Health Center, who was trapped when the fire changed direction. His condition, however, is not serious. 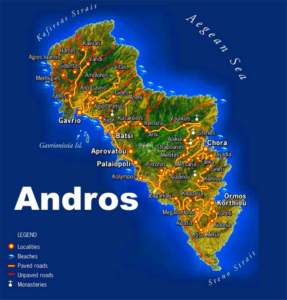