The text does not mention the term “German reparations” anywhere

The findings of the Parliamentary bi-partisan committee on the issue of the WW2 German reparations to Greece will be discussed in the House on Wednesday. Nowhere in the findings, however, is the term “German reparations” mentioned specifically.
The document, in fact, seems to be very vague and general in its wording, attempting to create an impression of taking the thorny issue head-on, rather than actually doing so.
The text to which MPs will be called on to vote, among other things notes that “the issue of debts towards Greece from the First and Second World Wars remains open, as an inalienable debt which seeks persistently its moral, historical and legal vindication”, adding that “there is no question of the claims being withdrawn by the Greek State “. 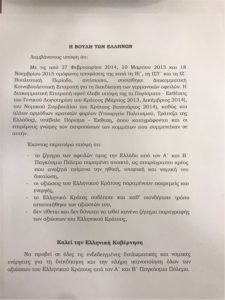