This resolution comes as the finalization of the 2016 decision which aimed, for the first time, to restore and recreate one of ancient Greece’s most impressive palaces.

Ancient Pella was the capital and one of the most important urban settlements of Northern Greece in antiquity. This very palace was where the legendary Alexander the Great was born and raised. 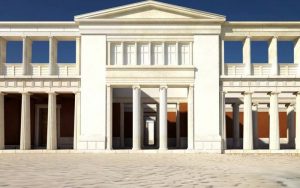 The ancient Macedonian palace was a massive construction, comprised of a complex network of buildings which were connected to each other through loggias, staircases and paths.

The fact that it was built on different levels made it even more impressive structurally.