The RAND Corporation has released a report highlighting the cost of training U.S. Air Force pilots. It comes at a time when the force is worried about a shortfall in pilot numbers.

It uses an Aviation Bonus and Aviation Incentive Pay to retain its pilots and sustain the size of the force. Amid a recruitment drive from commercial airlines, however, questions have been raised about whether those bonus payments are high enough. The payments have also become discretionary programs under Department of Defense Instruction 7730.67 which means the Air Force has to annually justify the budget for them. Given the cost of training, RAND recommended that increasing those bonus payments to retain personnel would be more cost-effective than expanding the training pipeline to sustain the pilot inventory.

That training pipeline is extremely expensive. The analysis focused on several criteria such as operating and support costs, fixed and variable costs as well as costs per flying hour across the whole pilot syllabus. It found that the cost of training a basic qualified fighter pilot ranges from $5.6 million for an F-16 pilot to $10.9 million for an F-22 pilot. Costs are also high for pilots training on attack aircraft and bombers. For example, total estimated costs for training a basic qualified A-10 pilot add up to $5.96 million while the total for the $2.1 billion B-2 stealth bomber is $9.89 million. Even though the financial outlay is lower for transport aircraft, the costs still come to $2.47 million per C-130J pilot and $1.1 million per C-17 pilot. 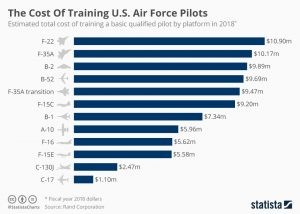