The independent news portal Ahval News, which covers news from Turkey, claims that Erdogan will complain to German Chancellor Merkel about a giant Christain cross on the Greek side of the borderline, citing the Turkish president’s displeasure.

The 15-metre high metal cross, which was erected last weekend in Nea Vyssa, Evros, in the area of the Greek-Turkish border, has caused the displeasure of the Turkish leader, who, according to the news portal offends the religious sensitivities of Turkish Muslims. 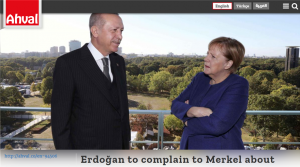 Relaying information from Turkish media, such as the pro-government Yeni Akit, the piece in Ahval says that “the placement of the cross was intended to provoke the religious sentiment of Muslims in the region, east of the border” and that the Turkish president would express his irrititation to Mrs. Merkel in today’s teleconference, together with the President of the European Council, Charles Michel on Euro-Turkish relations.

US Embassy in Ankara: Map of Seville connecting Greek-Cypriot EEZ has no legal basis

According to the piece, during the consecration ceremony of the cross, the Greek Orthodox priests purportedly said: “Every time the Turks see it, they will remember us”. However, Ahval News notes that Greek media that broadcast the news, denied such comments were ever made by the priests.

The huge and imposing Cross from September 14 was raised in the courtyard of the monastery of Agia Skepi – Agia Paraskevi in ​​Nea Vyssa of Evros.

The consecration was performed by His Eminence the Metropolitan of Didymoteicho, Orestiada and Soufli Damaskinos, accompanied by the Professor of the Monastery of Archimandrite Bartholomew Asteriadis.

Ahval News is an independent news portal, funded by the United Arab Emirates and is accused by the Erdogan regime of having links to the Gülen movement.