The Turkish media received the post in celebratory tones

The US embassy in Ankara posted on a map on its official Twitter account of the “Map of Seville”, which records the connection of Greek and Cypriot EEZ, claiming its has no legal validity.

According to the post,  the US does not take a stance on issues of disputed sea borders of other countries. The US Embassy emphasises that he understands and that neither the European Union considers the Charter of Seville a legally binding document. Finally, it called on Greece and Turkey to initiate preliminary contacts as soon as possible, as the US supports dialogue and negotiation. 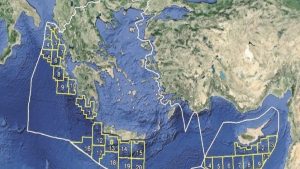 The so-called “Map of Seville”, which depicts the delimitation of the continental shelf of Greece and Cyprus, is based on
provisions of the Law of the Sea. This is a study carried out in the 2000s by the University of Seville, following a mandate from the European Commission, on the application of international maritime law in the SE Mediterranean and the definition of the EEZ, in accordance with international law.

Given that according to the United Nations Convention on the Law of the Sea (UNCLOS) convention the islands have a coastal zone and an EEZ, the study maps of the University of Seville delimit the right of the EEZ to Kastellorizo, allowing the connection of Greek and Cypriot EEZs in the Eastern Mediterranean.

The statement of the US embassy in Ankara was reproduced by many Turkish media (“Hurriyet”, “Yeni Safak” etc.) in celebratory tones.