It was unearthed from the heavy rainfalls

A bronze bull figurine came to light during recent heavy rainfalls in the region of Ilia in the Peloponnese.

A team of scientists from the Central Services of the Ministry of Culture and the Ephorate of Antiquities of Ilia at the Olympia Archaeological Site made the find during an autopsy they carried in the area. 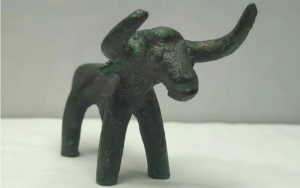 According to an announcement by the Ministry of Culture and Sports, the small, intact figurine was located thanks to the observation of archaeologist Zacharoula Leventouris near the Temple of Zeus in the Holy Alter of Olympia, as she noticed one of its horns protruding from the ground, after the recent, heavy rainfall.

The artifact was transported to the laboratories, where it was curated by conservators of the Ephorate of Antiquities of Ilia. The figurine will be thoroughly examined by archaeologists who will determine its date and type.

As the ministry said, based on the initial examination, the well-preserved figurine of the bronze bull was one of the thousands of votive offerings dedicated to the mighty Zeus in his great sanctuary of Olympia during the geometric period (1050-700 BC). 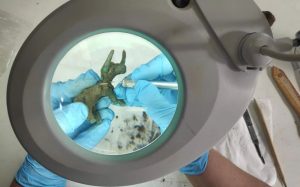 The bull, like the horse, was one of the most important animals for human survival and the evolution of civilisation until modern times. Thus it held a special role in the worship of the gods of antiquity and was dedicated by the faithful for their consolation, supplication, or as a sign of pleasure.

Like dozens of similar figurines depicting animals or human figures, the bronze bull seems to have been offered by a believer at the time of the sacrifice, as evidenced by the strong burn marks on the sediments during its purification. A large number of figurines found in the thick layer of ash from the altar of Zeus that covered the entire area is exhibited in the second room of the Archaeological Museum of Olympia and is indicative of the importance of the Sanctuary of Olympia as a pan-Hellenic centre. 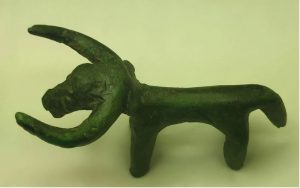