Last month, the PIJ fired more than 100 rockets & mortars into Israel, sparking retaliatory strikes against dozens of terror targets by the IAF

A CNN reporter was given a rare tour of a Palestinian Islamic Jihad terror tunnel in the Gaza Strip, in addition to gaining access to training exercises and rocket launchers used to fire missiles from the Hamas-ruled enclave into Israel.
CNN’s Ian Lee was blindfolded as he was led to each destination on his tour.

He described the tunnel as “hot and humid, narrow and low hanging. It feels claustrophobic,” in the report released on Sunday. He added, “Israel has a different name for them: terror tunnels.” 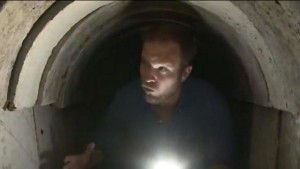 The tunnels have been used to smuggle arms into the Gaza Strip as well as send terrorists into Israeli territory with the aim of carrying out attacks.

One Islamic Jihad member, Abu Abdallah, told Lee the tunnels were used to protect the militants from Israeli fire.

“We use them as a shield against heavy missiles fired by F-35 and F-16 aircraft, as well as helicopters, so that our fighters can move and play their role to defend the Palestinian people”

“Don’t be afraid. God is with you,” Abdallah is heard telling fellow terrorists, before reciting verses from the Qur’an. 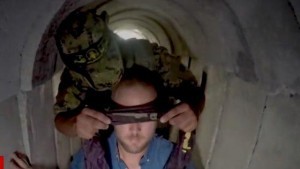 Abdallah then leads the blindfolded Lee onto the next stop on the tour, a rocket launcher.

“He’s telling me this weapons system here has the range of about 4-6 kilometers. It was recently used against Israel,” Lee said. 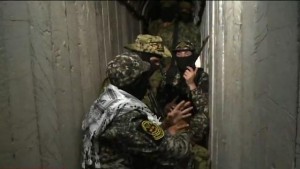 Last month, the PIJ fired more than 100 rockets and mortars into Israel, sparking retaliatory strikes against dozens of terror targets by the Israeli Air Force. One of the rockets fell on the courtyard of an Israeli kindergarten shortly before the children were scheduled to arrive.

Abdallah told the reporter: “The world needs to know that the resistance never plans to target children,” but added that sometimes their aim is off target.

For close to two decades, Hamas and other Gaza-based terror groups have fired rockets indiscriminately into Israeli population centers.

“The world hears the conflict only through Netanyahu’s voice. We try to make it hear us through the sound of these simple missiles, to say that we are here, we have land, we are human beings. We want to live in dignity,” Abdallah said. 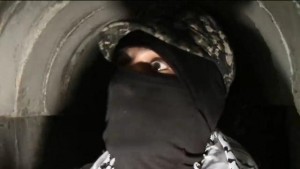 Abdallah also said his terror group was proud of the support it receives from Iran. Tehran is known to have given aid — both for training and providing weapons — to Hamas and the PIJ.

“Israel is proud of its support from the United States and we are proud of Iran’s support of the Palestinian resistance, on the moral and logistical level,” he continued. “There is nothing wrong with it and that is not a secret.”