…while to this day, the Albanian authorities’ investigation on Konstantinos Katsifas’ execution is yet to be concluded

Last Saturday in the Albanian town of Avlona, ​​a serious incident involving a 47-year-old Albanian took place, which demonstrated clearly the double standards used by Albanian Police Special Forces (RENEA) compared to the case of the Greek minority member Konstantinos Katsifas. RENEA operatives executed Katsifas, 35, cold-blood and point-blank, on the day of the Greek national anniversary of October 28, 2018, in the Greek minority village of Vouliarates in Northern Epirus, at the southern part of Albania.

On Saturday, though, according to the Albanian media, RENEA officers encircled in Avlona the hideout where the dangerous Albanian fugitive was hiding in. The 47-year-old, convicted in absentia of two counts of murder and drug trafficking, stormed out of his hideout, shooting at the police officers.

The reaction of the RENEA officers, however, was immediate, shooting the offender on his leg and then giving him the necessary first aid before being taken to the hospital.

It’s needless to say, that this is not how they acted in Katsifas’ case… 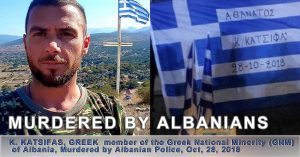 Konstantinos Katsifas, although he was isolated and trapped on top of a mountain, unarmed as it turned out, was executed with two balls near the heart. Katsifas was executed though he was not a criminal, and although at the time of his arrest, no one was in danger.

RENEA apparently was obeying “higher” orders, as they executed Katsifas for being an “extremist” who “threatened the lives of police and civilians”, failing to follow the due standard procedures they followed in the case of the 47-year-old Albanian criminal.

It should be noted that to this day, the Albanian authorities’ investigation about the circumstances under which Konstantinos Katsifas was executed has not been concluded.

All this time the prosecutor’s office has been trying to prove Katsifas was a “Greek extremist”. However, there is a serious inability to substantiate this provocative accusation that the Albanian Prime Minister Edi Rama, his colleagues and the pro-government media supported from the very beginning.