Stop the Turkish Culture and Tourism Ministry from covering the layers of Kayaköy’s heritage. Save the beautiful town by signing a petition 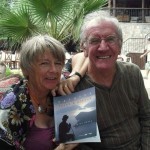 John Laughland, and his wife Beatrix, arrived in Turkey by way of a yacht. They purchased and restored a ruin in the Kaya valley and have lived there for twenty five years. She was a teacher in Berlin and he a civil engineer in England and the Middle East. John is also a regular contributor to the Turkish newspaper “Today’s Zaman”.

Both John and Beatrix have long been the core of an informal group of “Friends of Kaya” who are trying to preserve Kayaköy. The article below was written for “Proto Thema” in an effort to raise awareness and encourage people to sign the petition to save the ghost town of Kayaköy that was once home to a thriving community of mainly Greek Orthodox Christians from falling prey to  property developers that will purge the old village of its historic character.

Time is running out for Kayaköy as the Turkish Culture and Tourism Ministry is holding an auction on October 23 to lease out the town. The cost of the project is expected to reach 30 million liras and two companies have already tendered bids. Read John’s story, and if you are moved by his plea, sign the petition to preserve the Greek spirit of Kayaköy.

CLICK HERE to help save Kayaköy before time runs out.

The lady who is now my wife used to teach the German language to foreigners in Berlin and many of her students were Turkish, thus it was that she started to learn Turkish and was gradually introduced to Turkish culture. After several holidays in the east of Turkey visiting the homes of her Turkish pupils, in 1981 she found herself in a quiet little village called Hisaronu near Fethiye. Whilst talking to a couple of locals at the tea house she was told of a deserted village a few miles to the west; a village with two magnificent Christian churches and hundreds of ruined houses. The road leading to the village was the hand-pitched cobbled road said to have been built by the women of that village. The village was, of course, Kayaköy formally known as Levissi by its inhabitants.

She spent half an hour attempting to find a taxi driver willing to risk his suspension by driving along that bumpy road. Having found a driver who of course demanded an exorbitant price they set off and almost an hour later reached Kayaköy. The driver told her his version of the story of the exodus of the Christian population fifty eight years earlier. Walking alone between the ruined houses she was overwhelmed by the melancholy evoked. Ten years later she took me there. By that time a new dirt road had been cut from Fethiye but we still had a job to find a taxi driver willing to take us the eight kilometres along that rough serpentine road to Kaya. The journey took about 40 minutes giving the average speed as 12 km/h. We two walked among the ruins and saw how magnificent the churches had been. Neither of us have any truck with actual ghosts but having recently lived in Greece, our imaginations conjured up the street noises of the town. Communication across the village between friends was by raised voice and we heard them. We heard too the lowing of the cows, the barking dogs and the crying of babies. By that time a few tourists were visiting the town and they walked quietly along the narrow paths talking in whispers as if in a cathedral. 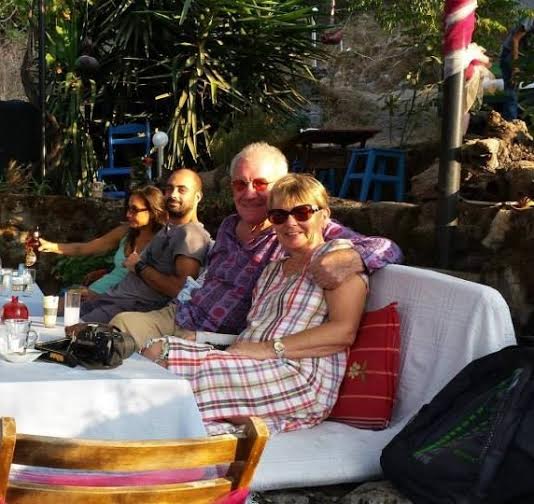 My wife and I restored a ruined stone cottage in the Kaya valley and have lived there ever since. In the early years one of our neighbours was a grand old lady known as Aysenine who still had the wedding trunk of her Christian friend Maria in her care. Asked if she and the Turkish villagers had waved off the Christians as they began their walk to the boats in Fethiye she indignantly answered in the negative, they had walked down with them and waved them off from the quayside.

In 1999 we were married on the small area of level land outside one of the two chapels overlooking the ruins and the valley on one side and the Mediterranean Sea on the other. We have despaired to see gradual increase in tourism and the decrease in the class of tourists. It is not unusual to see women walking the streets in beachwear now and men sitting in restaurants with no shirts on. Few seem interested in the story of the population exchange and few take any interest in Turkish culture but enjoy a version of English culture offered in the nearby bustling tourist town of Hisaronu, ten minutes drive away by a road as wide as a three lane highway.
Although one now has to pay to walk through the village no conservation work has been undertaken during the twenty six years we have lived here and a year ago the two big churches were locked to the public and said to be in risk of imminent collapse, though there is no evidence of that. The beautiful wooden doors from the lower church are in the care of the Fethiye museum but are no longer on display to the public. The killing blow to Kayaköy will come in the next year or two when a development company will “restore” a third of the houses into hotel accommodation. My wife and I still occasionally walk through the ruins but strangely we no longer hear the street noises, they have been replaced by the jolly sounds of tourism. Sadly and with heavy hearts, I think it might be time to move on. 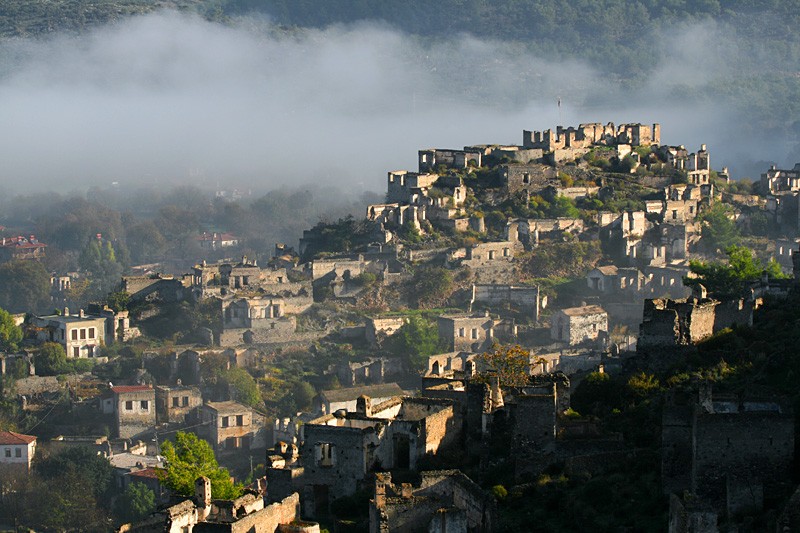 The misty ruins of the once-bustling town are nestled against the Taurus mountains. 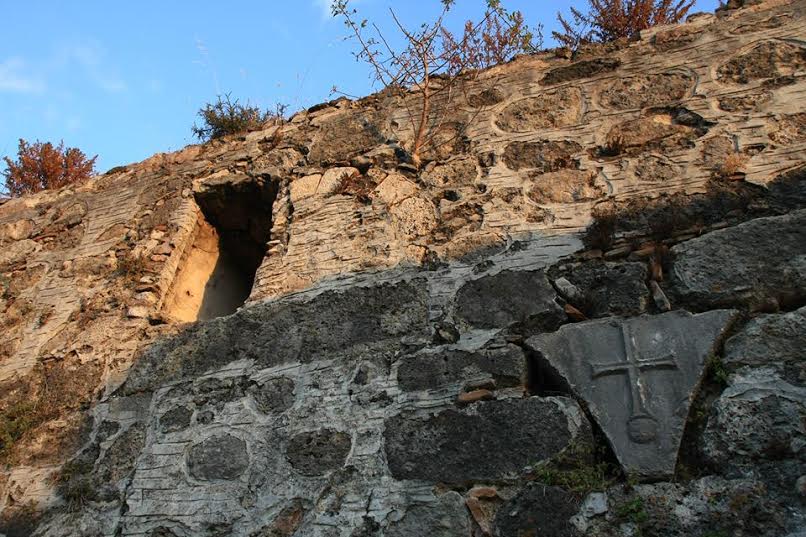 Once home to Greek Orthodox Christians… 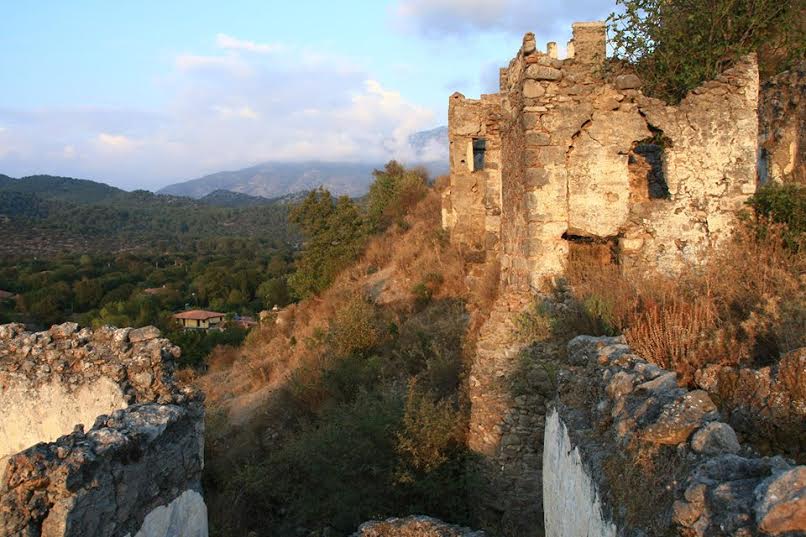 Now, it is hard to believe that Greeks and their Turkish neighbors coexisted peacefully in this ghost town. 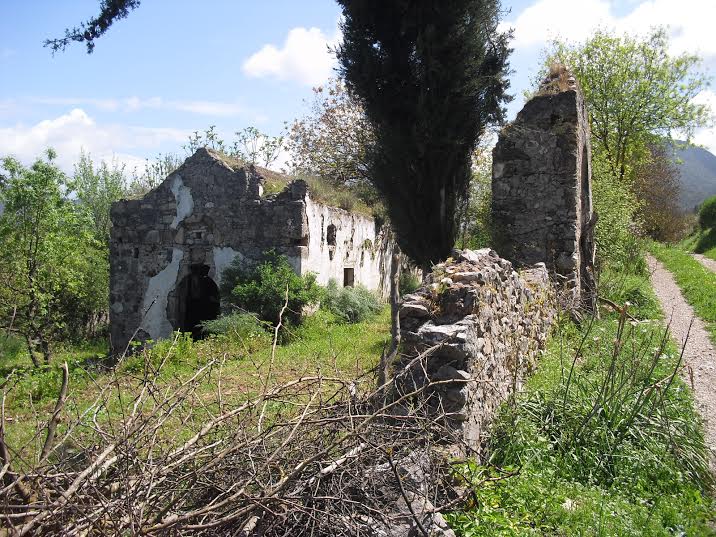 There was violence and retribution where people suffered on account of politics. 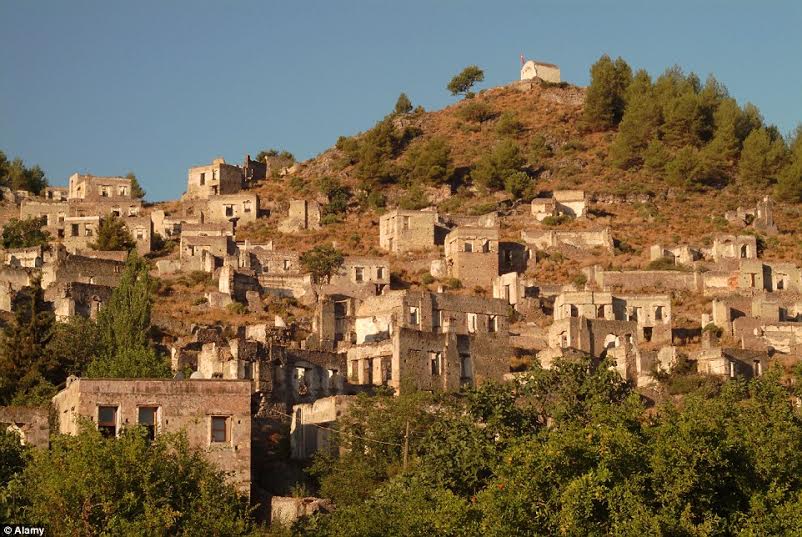 Hundreds and thousands of Greeks left regions all around Turkey in population exchanges where Greeks and Turks were uprooted, leaving their homes. 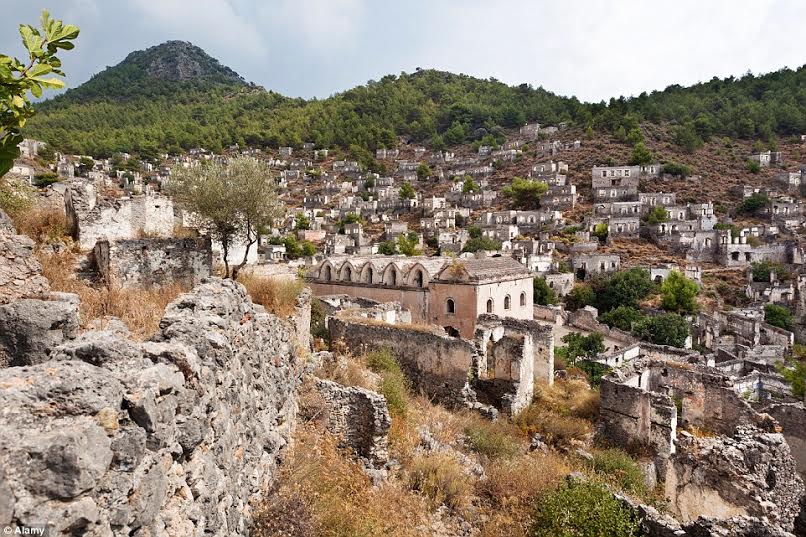 There were mutual compulsory population exchanges. 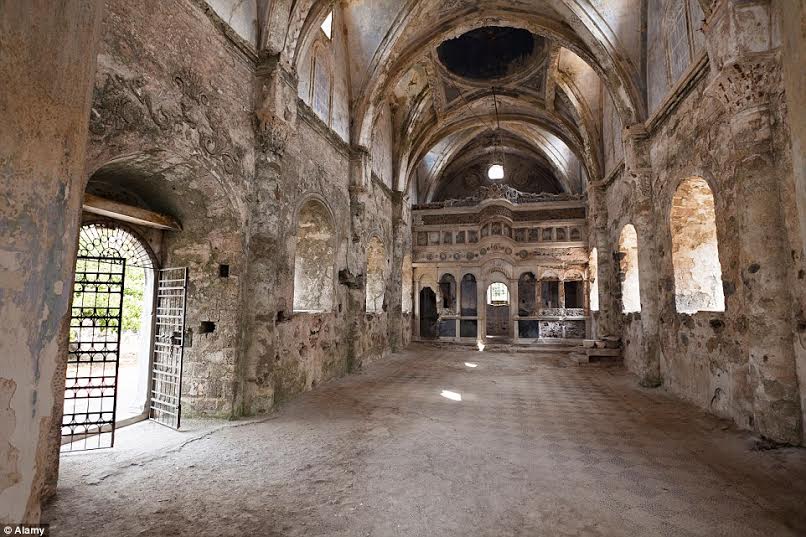 The roofless, weathered stone buildings are worn with age since the inhabitants left in the Twenties. 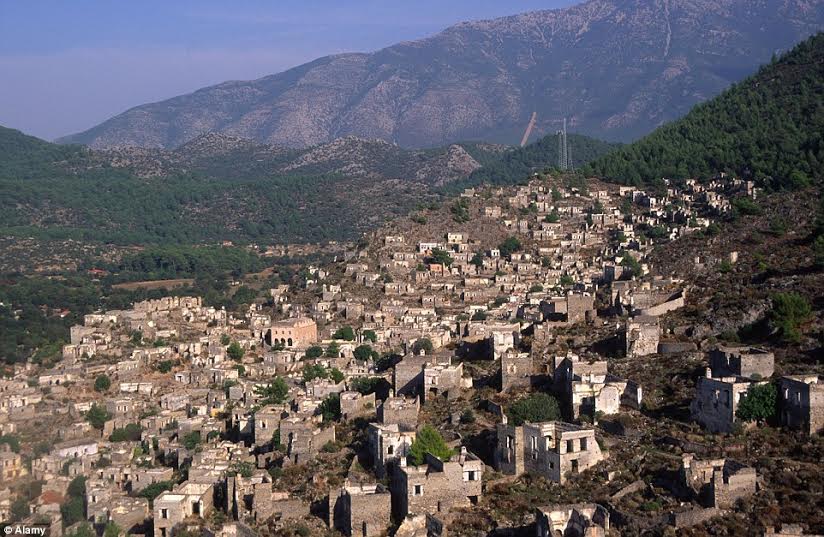 Now, approximately 500 homes sit empty and mostly roofless along with two Greek Orthodox churches and the fountains and cisterns that watered the city. 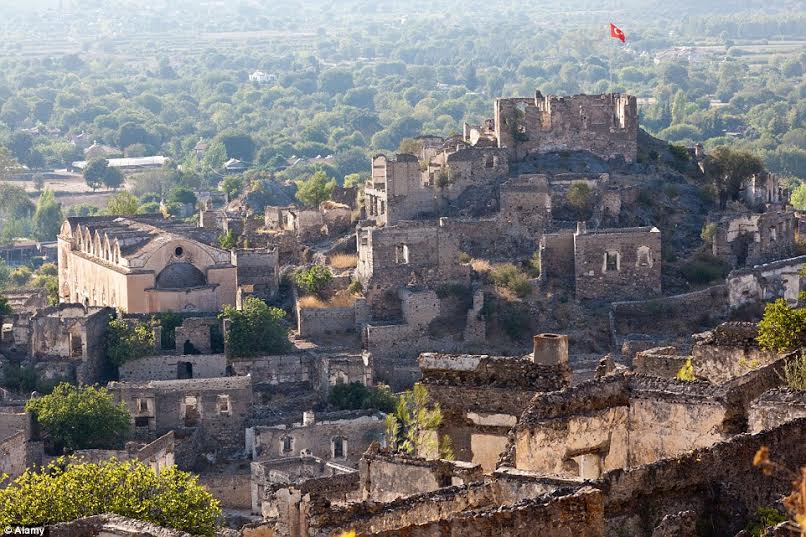 Louis de Bernieres, who also wrote “Captain Corelli’s Mandolin” also based another book “Birds Without Wings” on a fictionalized version of this ghost town. 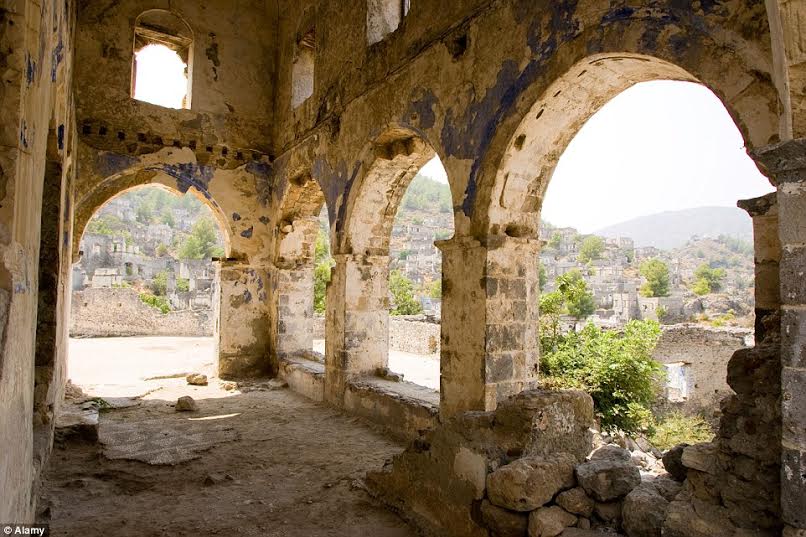 Kayaköy was adopted by the UNESCO as a World Friendship and Peace Village. 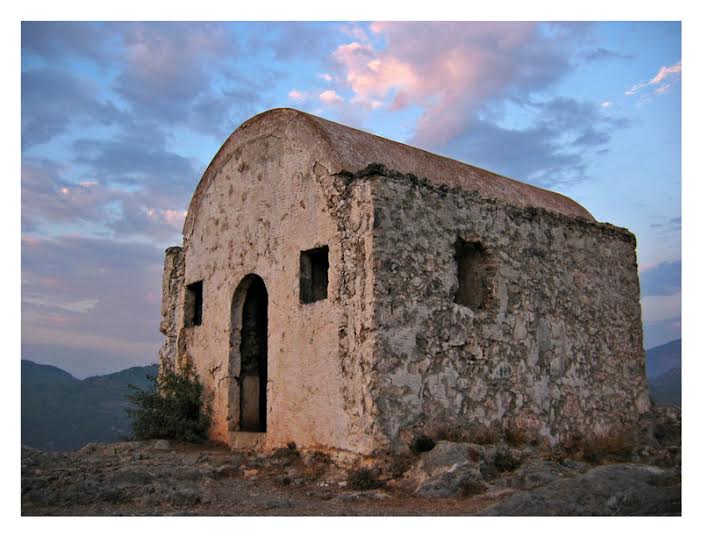